The 1980s was a time of uncertainty for the British Isles. Margaret Thatcher was in power, the coal mines were on the brink of closing, and things really didn’t look rosy. In 1984, a new TV series started, featuring the exploits of 4 labourers from around the country, all applying for jobs in Germany, and ending up in a building site in Dusseldorf., with *hilarious* consequences. Anyway, I could babble on about the plotlines and characters for hours, but I’m up early for work in the morning, and seeing as I haven’t done one of these for a while, I thought I’d continue it.

A very early memory of mine comes from this first showing. At the end of one episode, the sound started going all wobbly. Amazingly, thanks to the power of youtube, someone captured this very fault onVHS, and uploaded it to Youtube albeit from a different ITV region…

Now, for some reason I believed that “Do not adjust your set” type messages were actually there, because if you DID adjust your set, it would blow up., so every time something like this happened when I was a youngster, it used to scare me. Obviously, it’s 2020, and I now know that faults like this were caused by a master tape fault, or a dirty video head… either way, something was causing the video player to lose its tracking, and not able to keep the correct tape speed. Two memories of the show stuck with me… that fault, and the last episode of season 1 where “the hut bornt doon”. Oh, and of course, the theme music.

In (possibly) the summer of 1988, ITV started to show abridged 30 minute episodes, cutting the 1-hour long episodes in half. I remember watching, and liking the show, and also the two theme songs. It was one of the few shows at the time that used a completely different theme for the beginning of the show, and the end. I still have recordings of the theme that i’d grab off the telly, holding the tape recorder up to the telly. At the end of these episodes, the announcer would remind us that the soundtrack was available to purchase on LP.

Later that year, one of Chad’s freinds, Darren, who was several years older than me, said he had the afore-mentioned LP, and would I like a copy. Well. Of course I would. I handed him a cassette tape, and he returned, a few days later, with this… 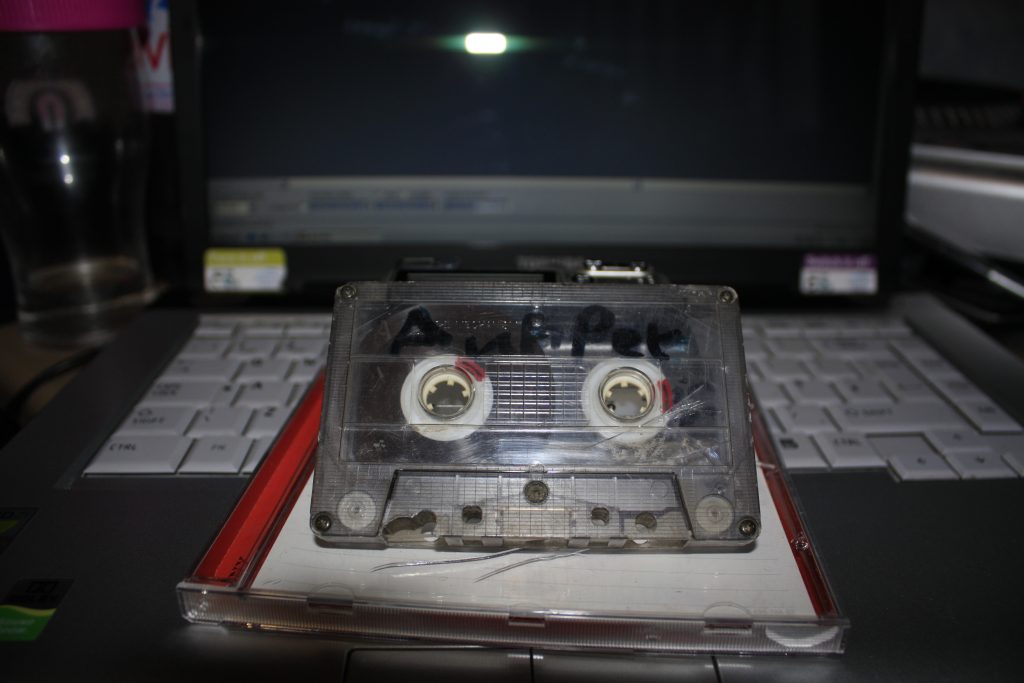 The writing’s mine, by the way, written several years later

It’s a very old photo, and again, I’m sure I’ve blogged about this before, but bollocks to it, I might touch on something I missed out previously. Plus, seeing as we’re in lockdown, it’s something to do, innit?

This was the night before I was going away for my first holiday to Sandy bay, and obviously the tape would come away with me. It would be played in the car ad infinitum. The tape would return to Sandy Bay, up to our last visit in 1992.

Of course, I picked up the soundtrack album, both on CD and LP. I was surprised just ow many differences there were in the two.

So, onto the tracks themselves. I’m only going to concentrate on side 1 of the LP, as Side 2 is just incidental music from the show. Darren didn’t record this, as cassette tape was a finite resource at the time, and to be honest, it’s not particularly interesting unless you have a knowledge and interest of the show. I’m also going by the original LP, as the CD has some minor differences, mainly the track order and lengths.

01. THAT’S LIVING ALRIGHT
The end theme to Series 1. Released as a single, and got to, I believe number 3 on the charts. It was featured on Now That’s What I Call Music 2. There are three versions of this I know of. The first is the one used on 12 out of the 13 episodes of the show. Episode 10 uses a different revision. This is also the episode that broke down as mentioned above. I always assumed that the tape fault had damaged the audio, so they had to hurriedly re-record it for future showings. Turns out this wasn’t the case, as if you listen carefully, this is also playing that dodgy version, so I’m at a loss as to why this version is different.

The third version is the partially re-recorded one. A strange one this, as it exists back in 1984, it’s used in his TOTP performance. Every second line is re-recorded, and sounds different to the original. No idea why this version was used on TOTP, as the original version clearly still existed.

02. BREAKIN’ AWAY
This was the intro to the show, and stayed the same all the way through. the first episode’s version is edited, and omits the “Not tryin’ a run” section. the first episode does, however, have the full guitar instrumental. The record fades after 25 seconds where it ends after 36 seconds in the programme.

It was this exact song that got me into looking for full versions of songs. I’d listen each time it was on and see if they’d play an extra bit of that guitar instrumental. The CD version fades out even earlier.

03. BACK WITH THE BOYS AGAIN
Undoubtedly my favourite theme of the show. Chuggy electric guitars, hint of piano, a great little track. Used for series 2, and Slightly re-recorded for the show, depending on the length of the credits, with the final episode having it played in full.

The same version is on the CD release.

04. GET IT RIGHT
A completely different version was used on the show for most episodes. The version on the show is a re-recording. the drum track remains the same, but the vocal and guitar are slightly different, with a slow instrumental ending, This was never aired in full (though I can recall a very long version being played on one of the abridged 30-min episodes) – the longest version of this instrumental features in episode 10 (Scoop).

Episode 1 also uses a different version, but this never used the official intro. Episode 3 uses this released version, with the 2nd verse faded out and used as the instrumental

05. THE SEVEN AGAIN
Used in Series 2, episode 2, one of the two songs that was used just once in an episode, and also one of the few times were a song needed LESS cowbell. It was re-edited for the soundtrack with the cowbell dropped way back in the mix, a slightly different arrangement, and an instrumental added. Fades early on the CD release. Probably my least favourite of the 6, but it still has its own charm.

06 TONIGHT’S THE NIGHT
Featured in Series 2, episode 5 and the last time an original song would be used in this series. The LP has the complete version, the show uses the instrumental after the first verse and chorus. the CD cuts out most of the song.

So, in conclusion, if you were after this I’d track down the original LP (Towerbell Records (1986), AUF 2), failing that, the CD, if the above shortfalls aren’t much of a concern (Prestige Stage + Screen , CDSGP0201)

One thought on “Day 4 – The Auf Weidersehen, Pet Soundtrack”