Oh my. I wish I’d discovered this sooner. I’ve had so much fun with it over the last few hours, and I’ve discovered quite a few things about how it all works, and how to fix / identify problems. For now, I’ve given up on the initial box of disks that I was originally trying, that was more problems than enough. Luckily, I found another box of disks this morning. These were (mostly) my own, so I had more of an interest what was on them anyway.

I did a bit of a livestream while I was converting the disks. Enjoyed it. Got it done while reminiscing about my college days, and how I used to walk in with boxes of disks so I could download files and put them onto the Amiga. Happy days.

After I finished the stream, I intended to do a recorded version where I went through the disks that I’d imaged…. there was one slight problem. Most of the disk images didn’t actually bring anything up. It was as if the disks were corrupted. Well, that was a waste of time, then. I wanted to do some investigation on what was happening, and to see if anything could actually open the disk images. I found a program called ‘hxc’. It has cropped up a few times, so I decided to give it a go. Turns out it did more than just allow you to explore disk images. It lets you check every part of the disk, to see if it was valid, and in a recognisable format. It can even generate an image of the disk to see if there are any problem areas. I threw one of my original dodgy rips into it, and it came back with this…

Yeah, that level of red isn’t good. Almost every block was coming back as corrupted. There was no way this disk image would ever work. Thankfully, all that was lost was a bit of time. Looks like the drive heads had became clogged at some point during the process, as I was able to get plenty of good reads as the night went on. One good thing about this, is that it can show where the problem areas are on disks. Remember I was talking about that floppy disk cleaner? I guess this could help you track down bits of the disk that need cleaning. In all honesty though, it’s more than likely that the media has just degraded over the years. Here’s a screenshot where there’s part of the disk near the end not reading correctly… 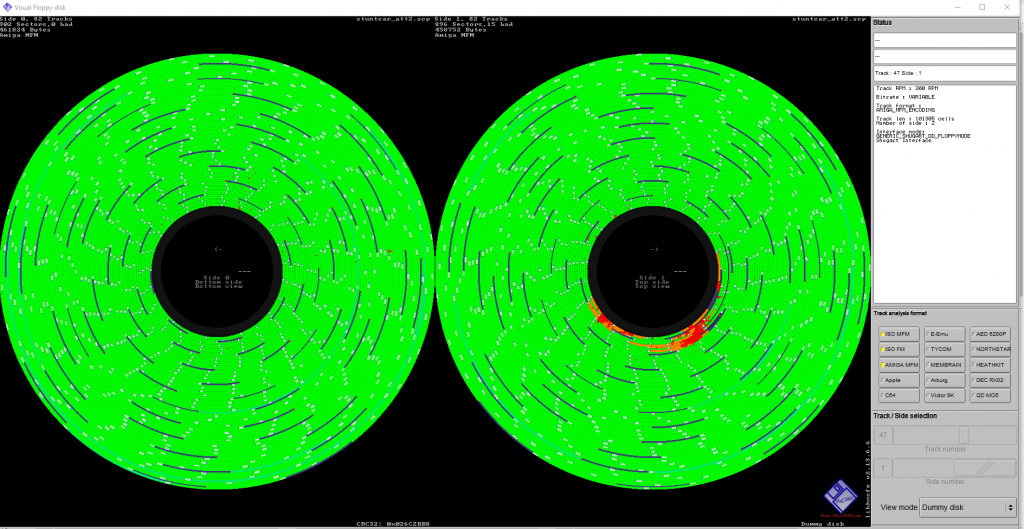 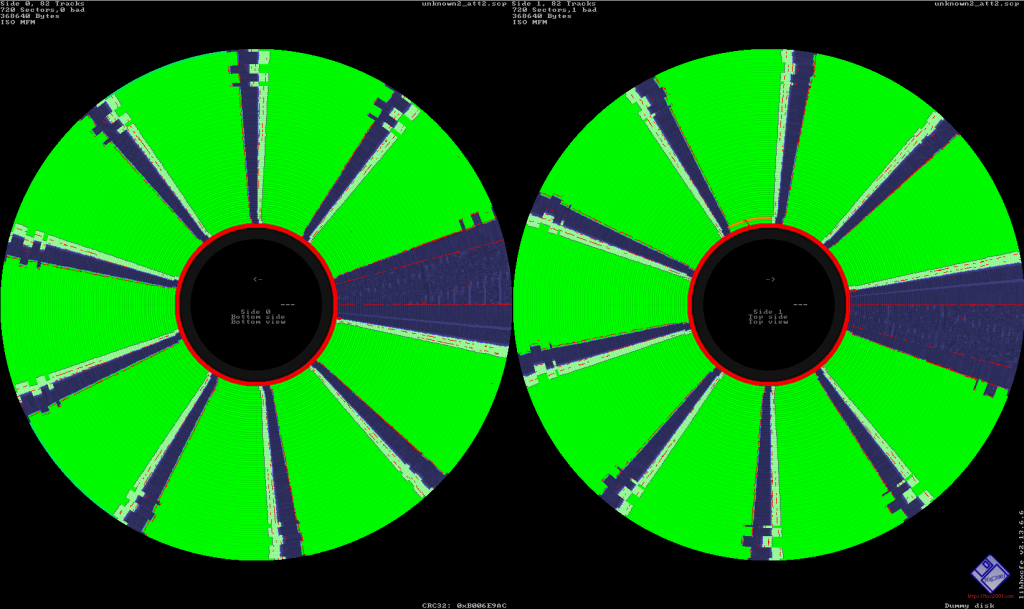 Oooh, pretty. This is a 720K formatted disk, as that’s what I was playing with. I then had a bit of a daft idea. This is literally just reading the magnetic information on the disk, and displaying if there’s valid information on it…. if I were to expose part of the disk to a nice, strong neodymium magnet… would that display exactly where I wiped? 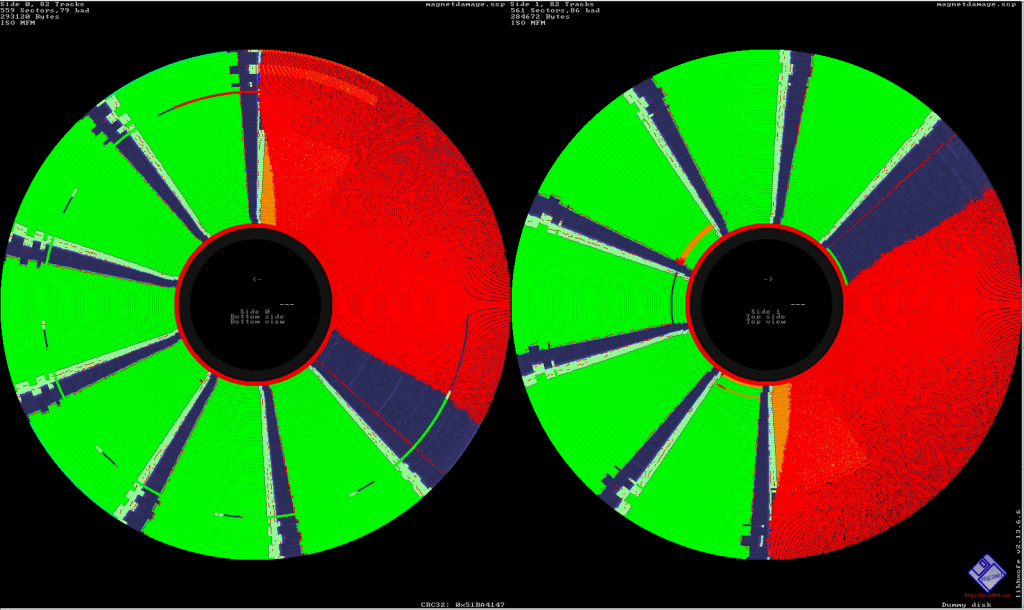 The answer is yes. I purposely only wiped a specific area of the disk, and this shows exactly where the magnet went. Of course, no data was lost, as you don’t actually damage a disk by wiping it with a magnet, you simply just destroy the data. I simply wrote the image back to the disk.

I’m pretty confident that this Greaseweazle is the best thing I’ve bought for a long time. Sorry, I’m probably the only person on the planet that thought this deserved a blog post, but this has amused me greatly. It’s given me a new found affection for the floppy disk that I haven’t had since the 90s. I’ll be back to bore you more shortly.

No, I haven’t gone and got myself a new girlfriend.

Instead, I’ve invested in a little PCB known as the Greaseweazle. And I’m sure I’m spelling that incorrectly, as I think I’ve spelled it about 4 different ways in the last hour alone. Basically, it allows you to create images from floppy discs, most notably, Amiga disks As you can imagine, this is somethingthat’s of interest to me, as I’ve been an Amiga fan for…. ooh, almost 30 years.

As I ‘m sure you’ll be aware, I’ve spent the last year reliving some of my amiga memories, especially afterresurrecting my old machine’s hard drive, and wallowing in the nostalgia of the old photos and music that was on there. there was one area that was, sadly, locked away. I had no way of converting my existing floppy disks to a readable format. There had been rumours that an Arduino based all-in-one USB device was coming onto the market, but the manufacturer is having difficulty with getting the parts, so I don’t think that’ll be available any time soon. While randomly browsing the net on Friday, I saw this thing called the Greaseweazle, and it was only £20. Yoink. I wasn’t even drunk.

I paid a little more to have the cables included. I’m sure I have loads of old floppy cables, but no idea where. Oh, and I also got a floppy drive cheap enough off Fleabay. again, there’s probably half a dozen kicking around this roomy mansion, but knowing I wouldn’t find one when I actually wanted one, I just plumped for buying one.

Days passed by, and they both landed through the Mercuryvapour Towers portcullis with a thud.

Turns out all I had to do was switch it over to a different USB port, and I was good to go. I think that USB port was dodgy anyway. Within seconds, I was imaging my first disk! 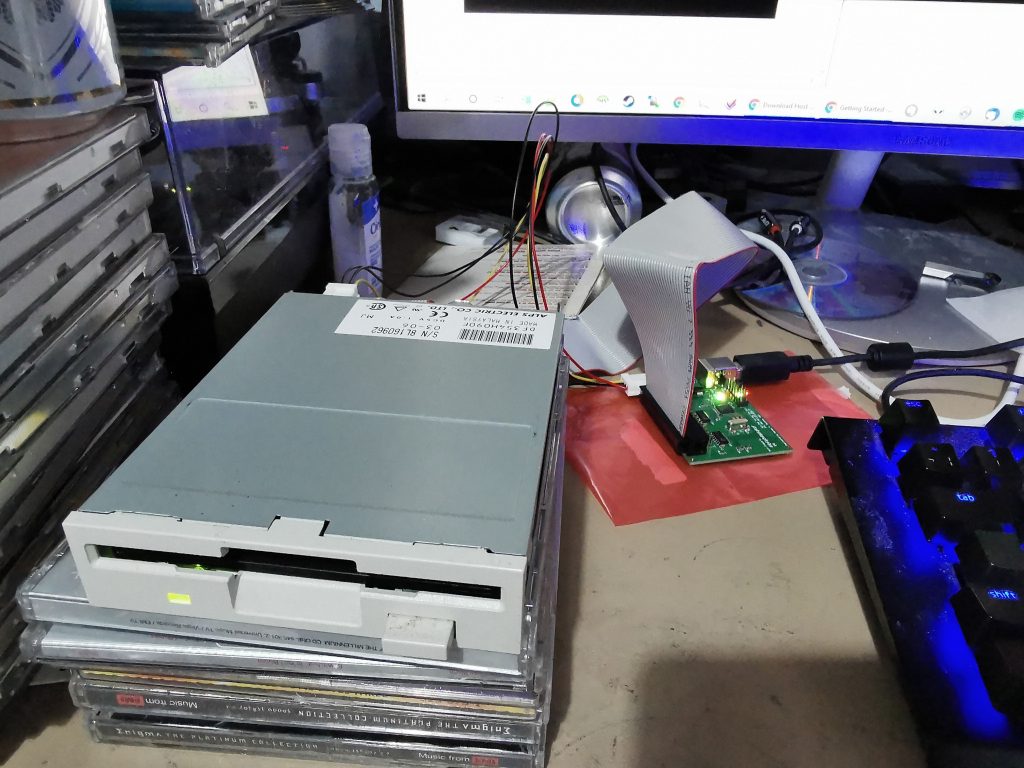 This was purposely a brand new blank disk, as I knew at least it’d work. It did, I think, as I shortly had a 70Mb(!) floppy image. At this point, I’m still not 100% sure why the size is so large, some 60 times bigger than a regular floppy disk. All I can garner from the manual is stuff about flux, and magnets, and it’s all going over my head.

Anyway, the initial test passed. I decided to try with an Amiga disk… Now, I didn’t have many of my own to try, so I dug into a box of random disks I bought from a radio rally several years ago. This one in particular intrigued me… 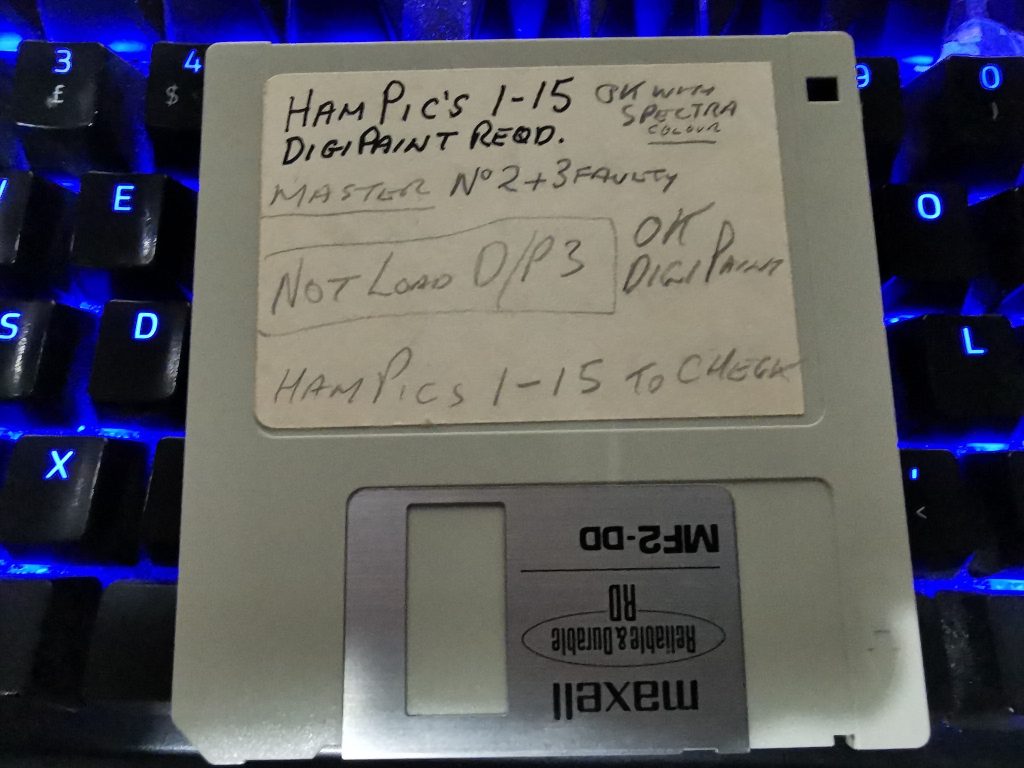 No, they’re not pics of ham, but HAM was an image format on the Amiga that used special trickery to get more colours on the screen than the chipset could natively handle. 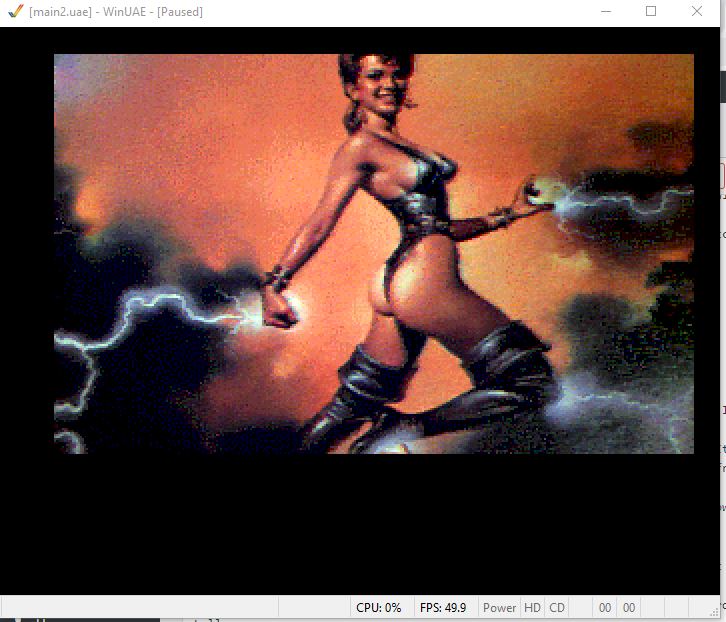 They’re mediocre by today’s standards, and the pixel-perfect screengrab probably doesn’t do it justice, I’m sure it’d have looked infinitely better when smoothed out via an RF signal on a CRT telly…

And that’s really where the fun ended. I tried other disks, and instantly found a problem. As I said, these disks never belonged to me originally, so I have no idea how they were stored, but they made some EEEVIL noises….

Initially I thought it might have just been the drive slipping. The drive was off ebay, as I mentioned earlier, so this was another unknown factor. The date code on the drive itself was 2006, so it might not have been used for 16 years. I left it to do its thing. It might work, it might not.

I fired up the image, and of course, it didn’t. Dammit. I was about to give it another go, but I thought I’d check the surface of the disk…. Oh. 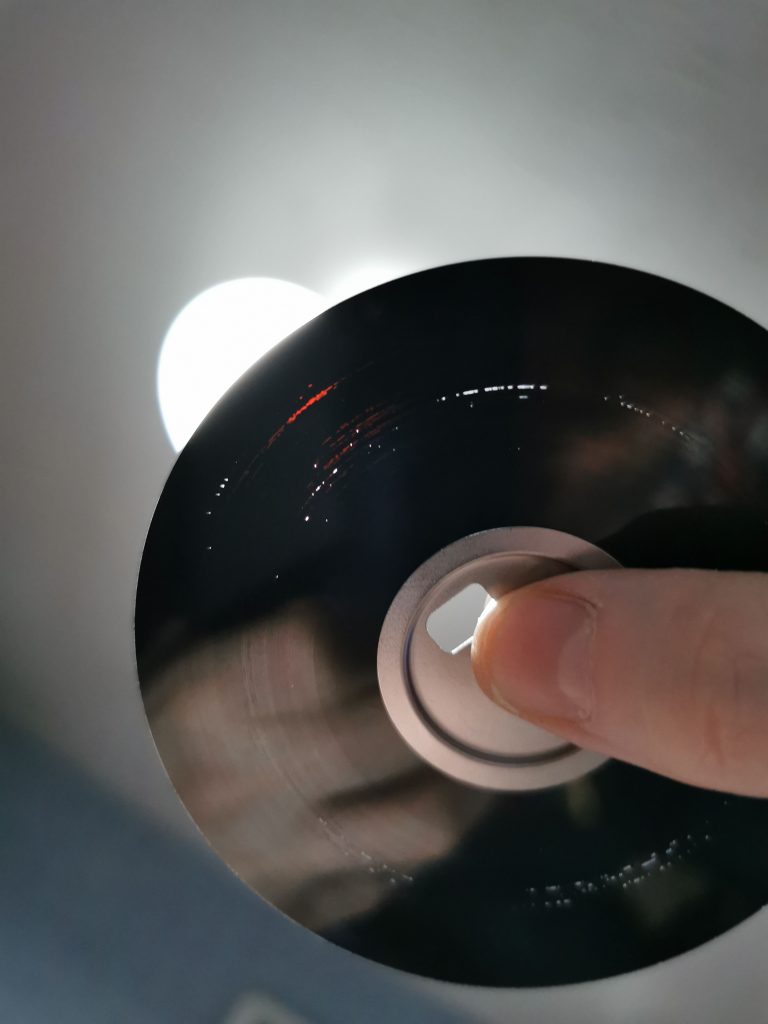 Yeeeah. Those patches shouldn’t be there. That’s where the magnetic layer is missing from the disk, rendering it completely and utterly useless. Well, shite. This was disk 1 in a 3 disk software package, so they’re all pretty much useless. I checked some of the other disks, and I can see what looks like mould on some of them, so I’m guessing they weren’t stored in the best of locations. A friend, Rob, has pointed me in the direction of a floppy disk cleaner, which I’ll probably end up getting, along with a bottle of Isopropyl alcohol

Damn it. All this time and effort, and all I have to show for it, is a ladies’ bottom. I’ve had worse days.