Well, wasn’t this morning fun? As you’re no doubt aware by the title (which I’m sure I can improve on, but probably won’t), today saw the first heavy snow shower in April for as long as I can remember. Now, snow in this month isn’t that uncommon, but usually it’s just a very brief blast that might last a few minutes, and melt shortly after. Apparently, it was cold elough for it to not even snow, but lay too.

Let’s turn the clock back a few hours. It was 5AM. I’d just finished my weekend late stint at the computer, and was getting prepared for bed. I’d gone for a pee, and noticed the sky was a very weird colour. Sort-of a light grey colour. Although the nights are indeed getting shorter, it was just too early for the sun to be rising. I did a double take, and noticed that the roofs were covered in snow… Yep, it had been snowing, and there was plenty of it too. The cars and the road were covered. Lovely!

Now I’d intended to go to sleep at that point, but I decided not to. I really wanted to see more of this, and get some photos at least. It’s the first time we’d had proper snow for quite a white. We’d had snow earlier on in the year, but…. it wasn’t quite right. It was more hail than snow, and wasn’t that photogenic, if you know what I mean. This was proper snow, the fluffy type, the stuff that piles up on the top of things, sticks to tree branches, and gives everything that wintry, frosty look. 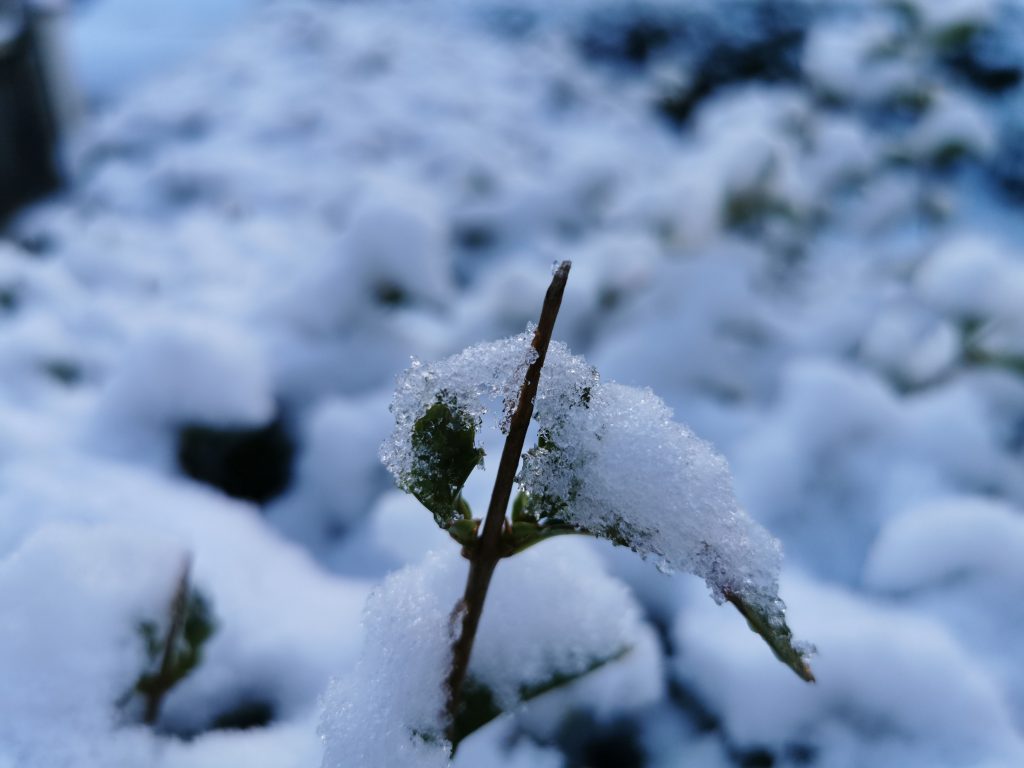 It was definitely the first time I’d seen it since I got the “new” phone with the decent camera, so I decided to break my duck, and actually head out of the gravel driveway for only the second time this year, and the first time for purely a leisure walk. The only other time was Wednesday, as I met up with “somebody”, as he’d ordered some beers and got them delivered to Mercuryvapour Towers.

I’m lucky enough to have a small park area not too far from where I reside, so this was the perfect opportunity to blast out of the camera, At just before 8AM, I donned my coat, and headed off for the first proper “leisure walk” of 2021. I was well aware that the paths were going to be extremely slippery. It appears that the temperatures had dropped again since the snow had fallen, as there was a slight crust of ice forming over the snow. I took no chances, and walked in the middle of the road. The small amount of vehicles that had went through the commoners’ suburban streets had thankfully melted a walkable path. It wasn’t just me who had this idea, as there was another set of footprints oddly going through the middle of the tracks and not actually on them. Surely you might as well have just walked on the path? Oh well. Makes it look like Fred Flintstone’s headed out to get the paper… 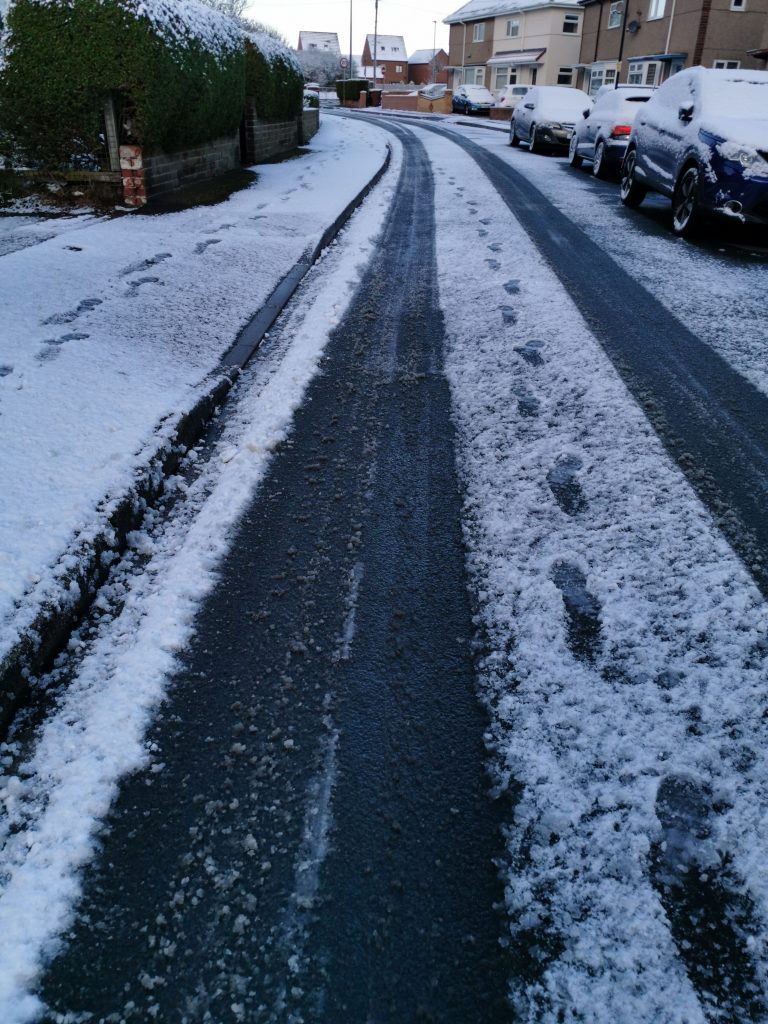 It was early, there weren’t going to be many cars about, and if there was, I’d hear them a mile off, crunching through the ice. I was also painfully aware that I hadn’t put my phone on charge for any period of time, therefore it was cooking at about 15%. Considering it was about to take the amout of pictures that it did. For the record, it conked out literally as I got to the front door. 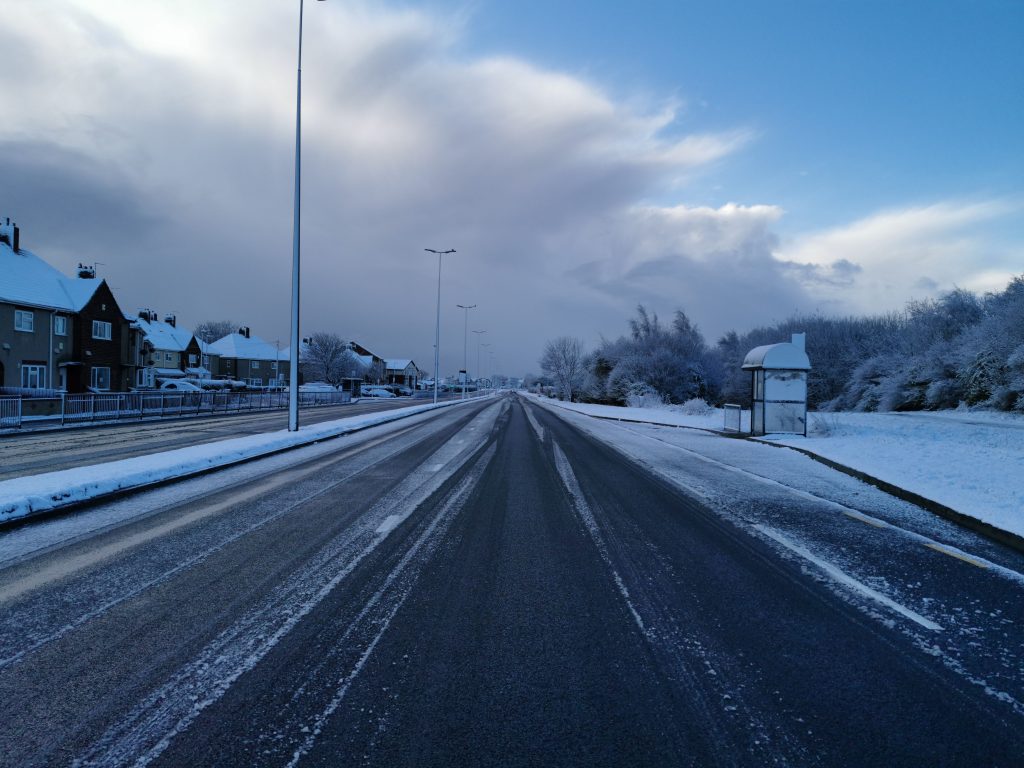 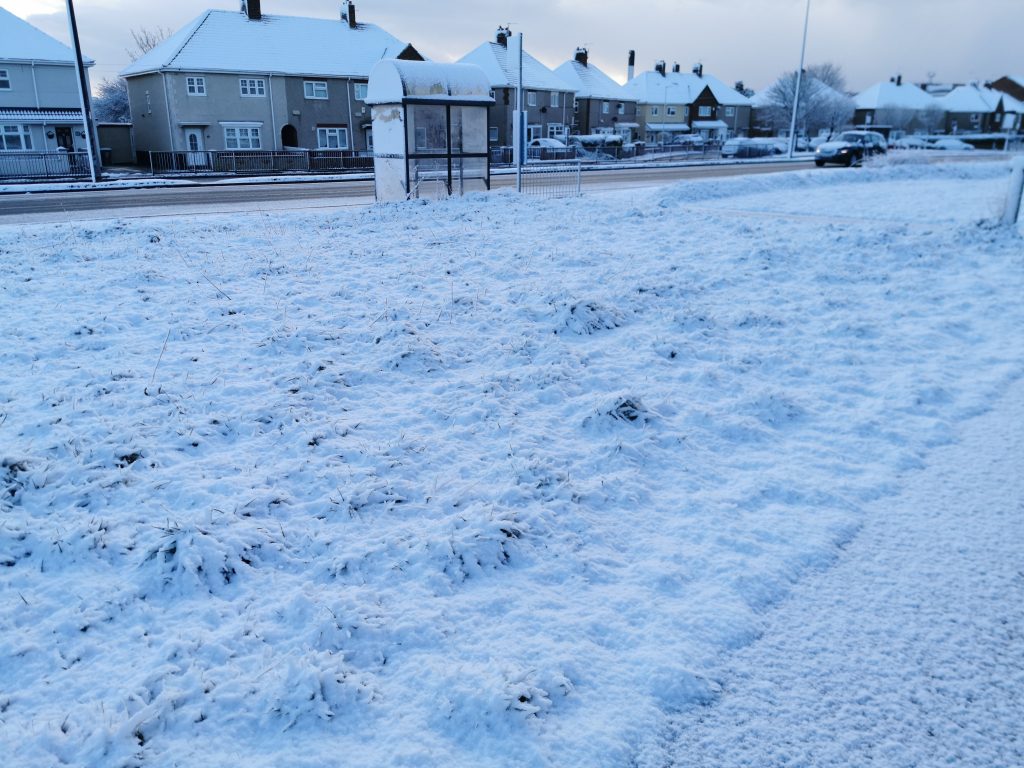 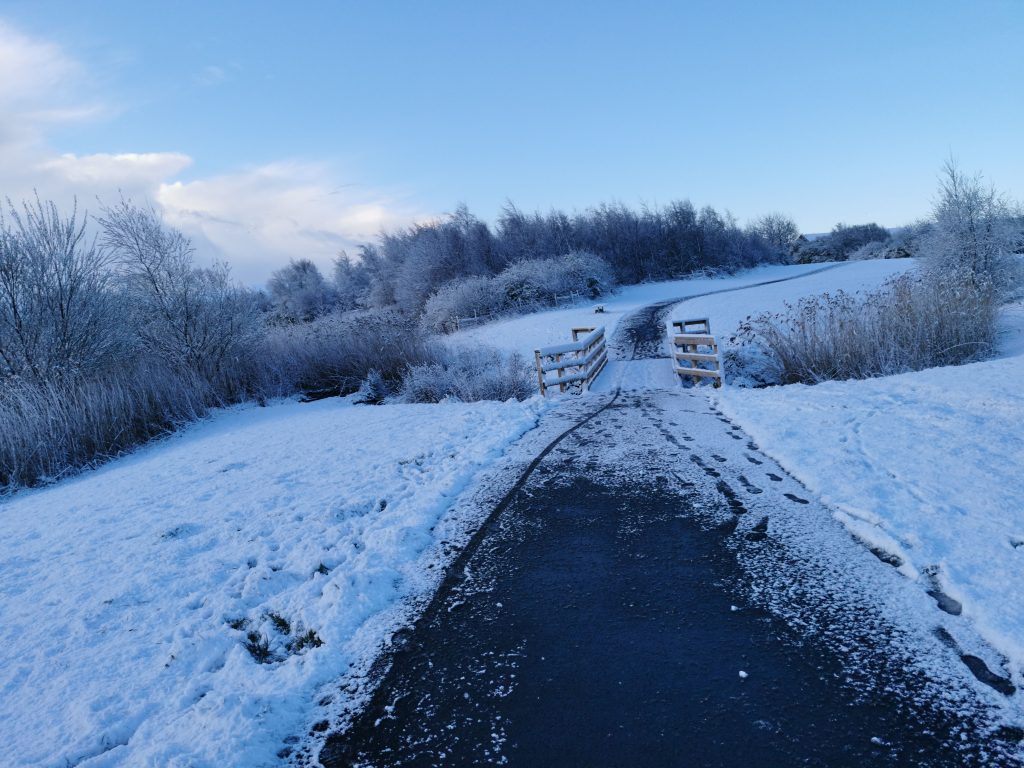 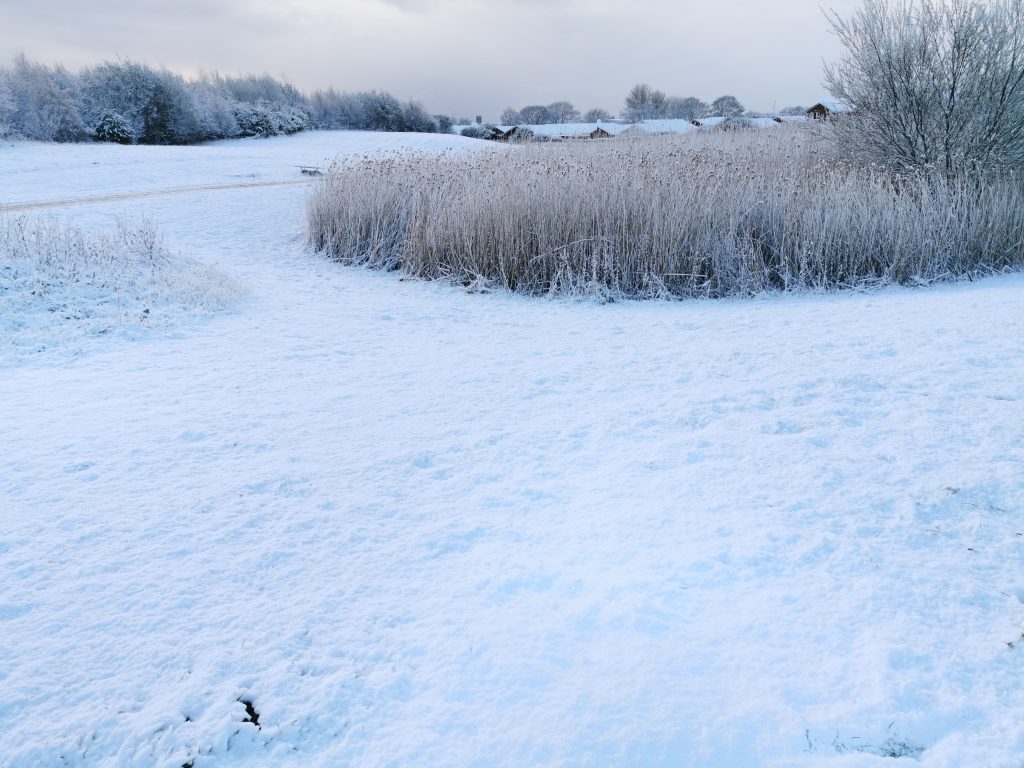 I had a very brief walk through the afore-mentioned park area. As I was taking photos, I had a brief chat to a lady who I hadn’t seen for a good long while – I’m sure I’ve mentioned her in my (unpublished) ramblings, but she’s from the Birmingham area, and used to always get the bus at the same stop as me. The last time she’d seen snow like this, was just after her son was born, and it was just outside Coventry.

There wasn’t that much more to photograph to be fair. The sun was starting to break through the clouds at this point, making way for a typically sunny, if a little chilly, spring day, and just a few hours later, any trace of the snow ever existing was to be confined to memories, and of course, these photos.

On a side note, whenever it snows, I always pile up a little bit to see how long it lasts. I’m not talented or patient enough to make a snowman, but somehow, I managed to accidentally sculpt a silverback gorilla facing away from the camera… 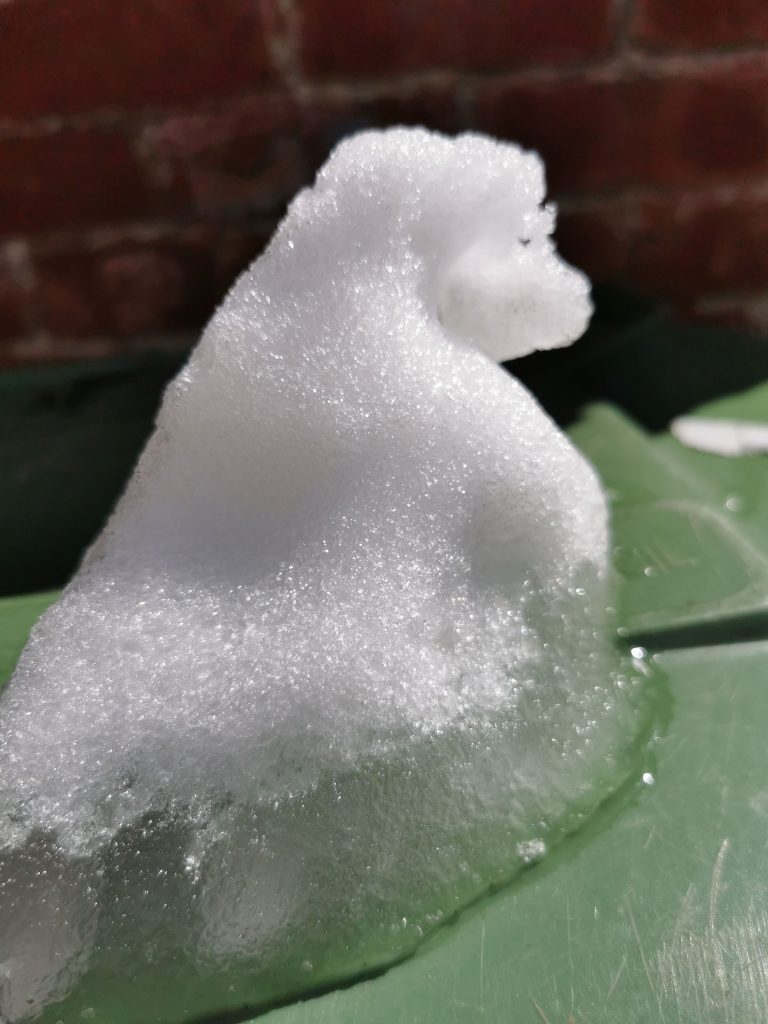 EDIT: As I’m sure some of you will be wondering (lol, righto), and my usage of the word “fall”, the title of the post comes from the Don Henley song “A Month Of Sundays”. It was the B side to his big hit “The Boys Of Summer”, and also featured on the CD pressing of the album “A Month Of Sundays”, but not the LP pressing. Whenever there’s snow in April, or November, the whole section of that song plays through my head… “Late pring snow and early fall sleet, I held the leather reins in my hand, felt the soft ground under my feet”. It was on the fery first CD album I ever bought and was going to be part of my “10 albums in 10 days” blog, but I never finished it.