A couple of years ago, during the height of what I affectionately call, the Panny-D (admittedly, not a name I invented myself), I came up with the idea of going to a random town, spending a couple of days there, and ultimately raiding the nearby charity shops. I thought it would end up no more than a drunken thought at the height of an insanely depressing time. A couple of months ago, I spoke to Chris about the idea… and he bloody loved it. He also thought it would be great to visit some… er, “lesser known towns”, and explore the sights, sounds, and almost certainly, smells of these different places. A plan was concocted, and before I knew it, we were booked up and winging our way down to the lovely fishing village of Skegness.

So, Friday came, I packed the essentials (a memory card full of music and a couple of T shirts), and off we went. Of course, just going to Skegness would have been a bit of a wasted journey without other stops, so on the way down, I chose a couple of other places, namely Scunthorpe and Grimsby. Chris almost forgot about the Scunthorpe bit, but luckily I reminded him about it with only 0.9 miles to go before the turn off. This would turn out to be the best move of the day. More on Grimsby later.

I had plotted a few places to look at in Scunny, (well, two car parks and a charity shop). Turns out the first car park apparently must have been an NHS one or something because it was closed. Luckily, the second one was open, and even better, it was free for two hours. That couldn’t have worked out any better.

So, charity shops, then. There were a few. I have absolutely no recollection of which ones we visited, but I do know the first one didn’t stock CDs. Oh no. Thankfully, this wasn’t the one I’d plotted on ye olde Googles, and I did pick up “5 for a quid” from one further down the road… this was a struggle, as it would appear some old folks’ home had just had a clear out of the ex-residents’ rooms, or something, as there were 8 shelves of absolute tat.

Of course, the next shop would be this charity shop that I’d located on Google maps, it looked huge, and normally, that’s a good sign. Off we went, and, I quickly began to doubt my map reading skills.. At some point, we’d ended up in the middle of some housing estate. That clearly wasn’t right. I even confirmed that it was open via the googles, so there was absolutely no way it had closed down. Absolutely no way at all. Google wouldn’t lie to me, would it?.

Turns out it had closed down.

Well not quite. It had just moved location, and by pure chance, we stumbled upon where it was now located. I don’t think I’ve ever been so disappointed in a collection of CDs in all of my entire career of trawling the shops. Ugh. I came out with ONE Paul Young CD and at the time, I wasn’t entirely convinced I didn’t have it in the collection. Of course, I could have checked the database, but I don’t think I could have faced the pain of spending an hour looking for this place, only to come out with nothing. Chris almost bought a knitted psyduck from another shop on the way down. I think this is his first foray into the world of pokemon 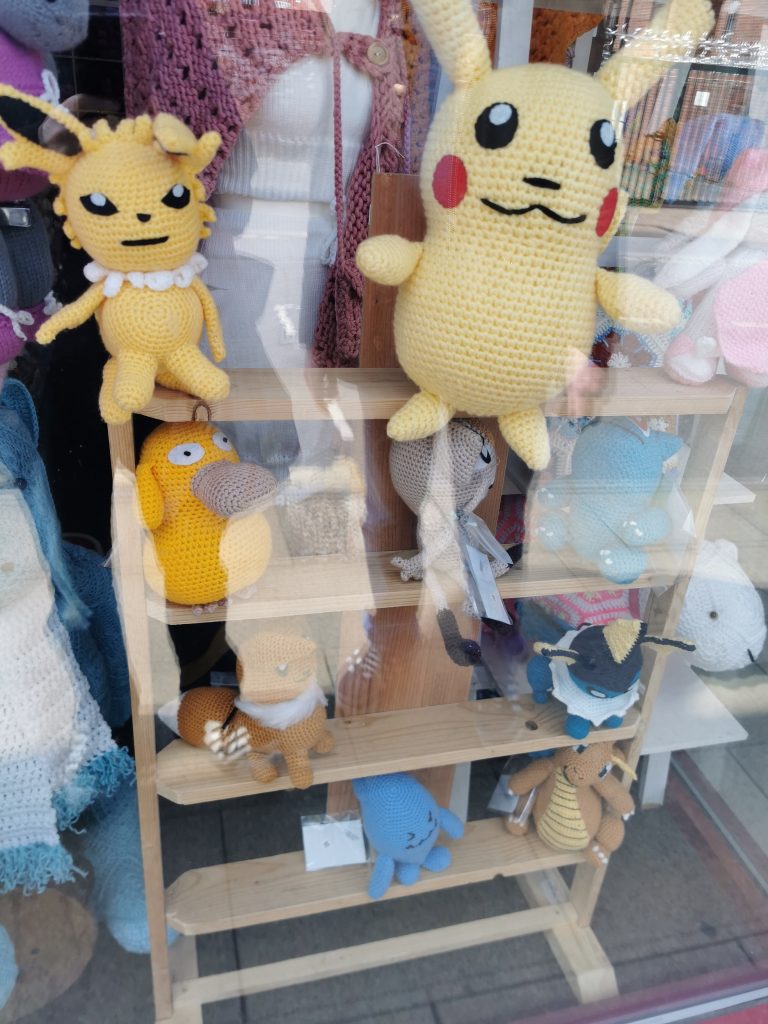 Overall, I enjoyed Scunthorpe. It probably would have been better if I didn’t send us on a wild goose chase looking for a shop that no longer existed, but in my defence, The Internets told me it was open.

Our 2 hours parking was completed with 18 minutes to spare, and off we popped to Grimsby…. oh my. A small part of me (read: ALL of me) wished we’d just plopped a couple of quid in the Scunny parking meter and spent a bit more time there. Grimsby is the land that time forgot. In fact, not just time. I think EVERYTHING forgot Grimsby..

Unsurprisingly, My first interest was a charity shop we’d passed on the way in. Chris stopped in a nearby car park to get some water, and I walked along. It became apparent that one of the myths I’d heard about Grimsby was entirely true. It really does smell of fish. And the charity shop was an absolute blow-out, as I hasn’t read the sign correctly…it was simply just a furniture shop, and didn’t sell CDs. Bah

We attempted to get into the town centre. Now, I can’t claim to know much about town planning and traffic management, but my word. Whoever designed the road layout and traffic light system in Grimsby, needs chopping up and feeding to the ample seagulls. It’s HORRIBLE. 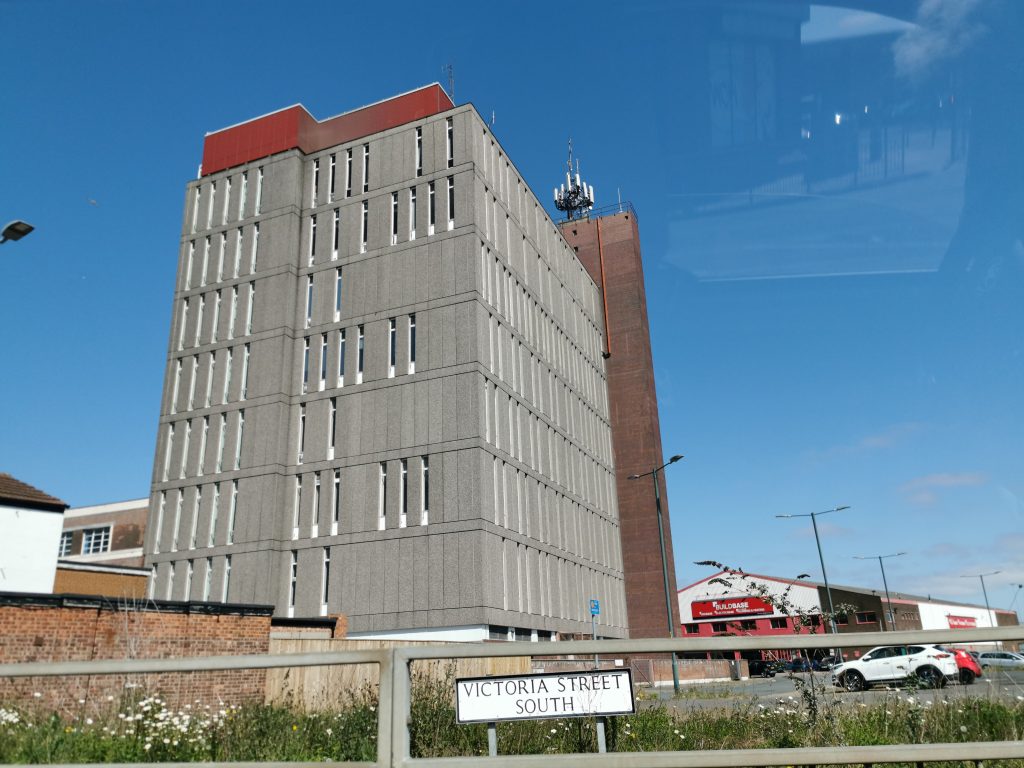 By sheer luck, we found a carpark, and abandoned the car.

I’m not too sure what to say without coming across overly offensive, but….wow. The smell of fish was soon overpowered by the smell of weed. The few charity shops I raided weren’t even that good. there was a pretty little shopping precinct… thing, and a church of some description. Chris mentioned that he’s like to come back and visit this place…. Sights, sounds and smells of the fishing industry? Yeah, you’re going back there on your own, mate.

I did get a flashback of home, as there was an Indoor market that was almost completely deserted… 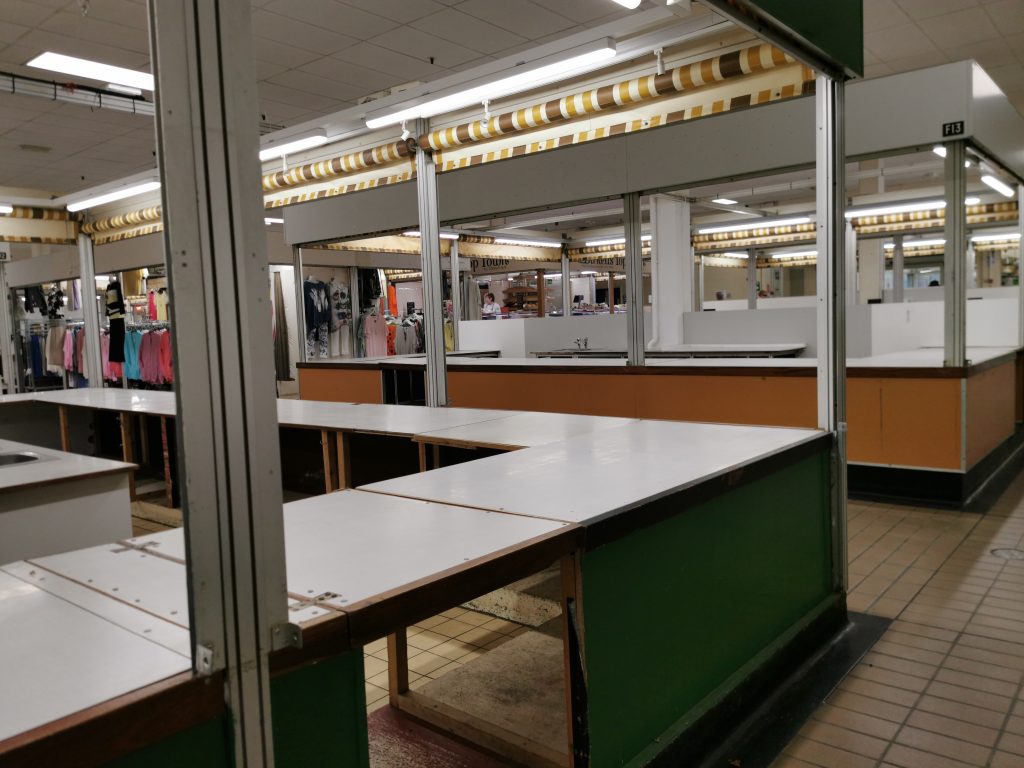 One thing that I did see, was some baby pigeons. Not very often you see those, which is just as well, as they were ugly little feckers 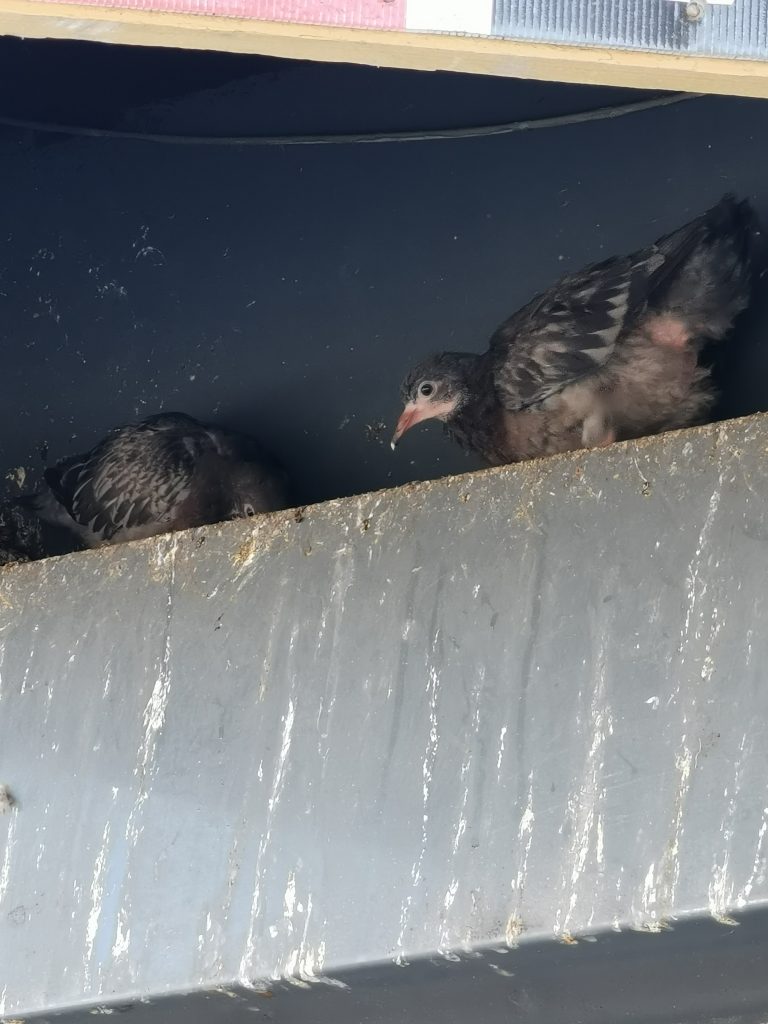 That was about it for Grimsby. Charity shops raided, the local “sights, sounds and smells” were successfully “endured”, it was time to make our way to Skeggy.

We got there at about 5PM. The guy from the B+B introduced himself to me and Chris. He was called Mike, and his wife, whom I never got the chance to meet, was called Yvonne. He asked us if we’re here for the scooter weekend. “Hartlepool”, replied Chris, presumably mis-hearing the question. At least it wasn’t me making an awkward faux pas for once. Turns out there was a scooter/mod rally thing on this particular weekend. Every hotel / B+B had scooters parked outside, and every band was playing The Jam.

The B+B was lovely. Completely spotless, and just a tiny walk from the local facilities… And by that, I mean the charity shops, Indian restaurants, and more importantly, the pubs. I only got one particularly bad photo of the outside of the place… 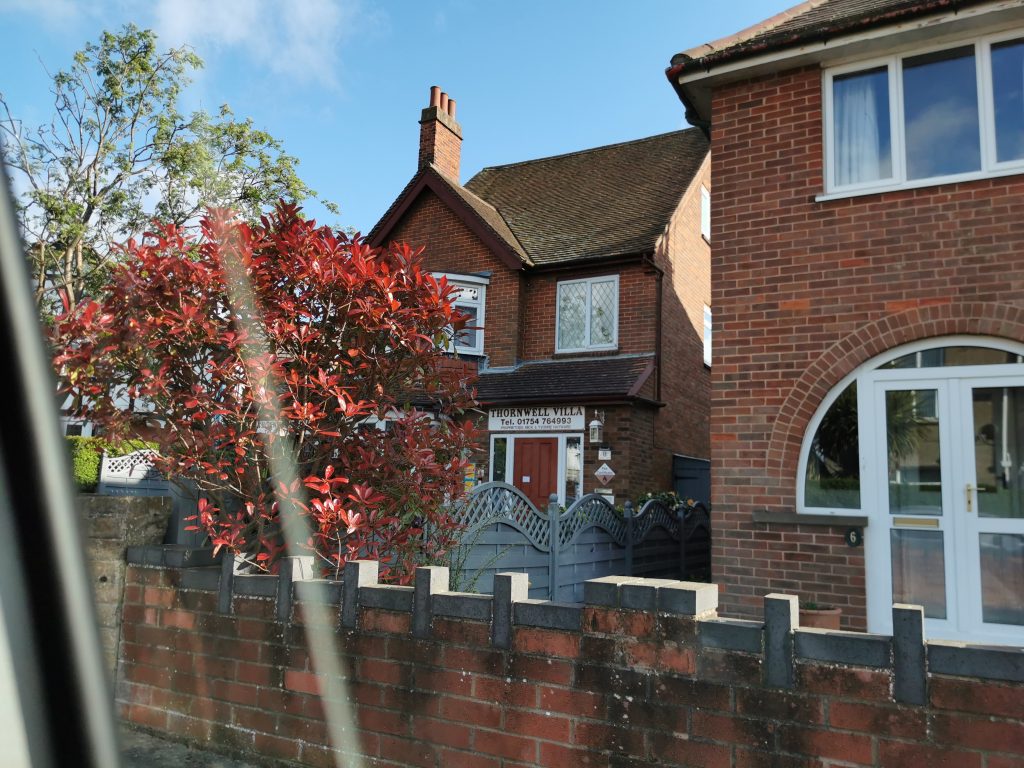 We dumped our stuff in the room, and fired up Google Maps one more time, and aimed it to the first Indian that didn’t have a shocking rating, and that place was called “Saffron”. Unlike the earlier incident, the technology didn’t fail us and we ended up walking there without incident.

A vindaloo and a pint later, we tried to find a nice quiet pub. That was a bit tricky, seeing as it was the afore-mentioned “Mod weekend”, and just a sunny weekend in general. We had a pint in the Wetherspoons whose name escapes me. The Red Lion? We soon decided that this was shit. After all, it was a Spoons. Time to look for somewhere else.

There was a strange deserted spot between the bars and the seafront. Seemed very eerie. Luckily that meant there as a small place called “The Tipsy Cow” that happened to be very quiet. Ideal! 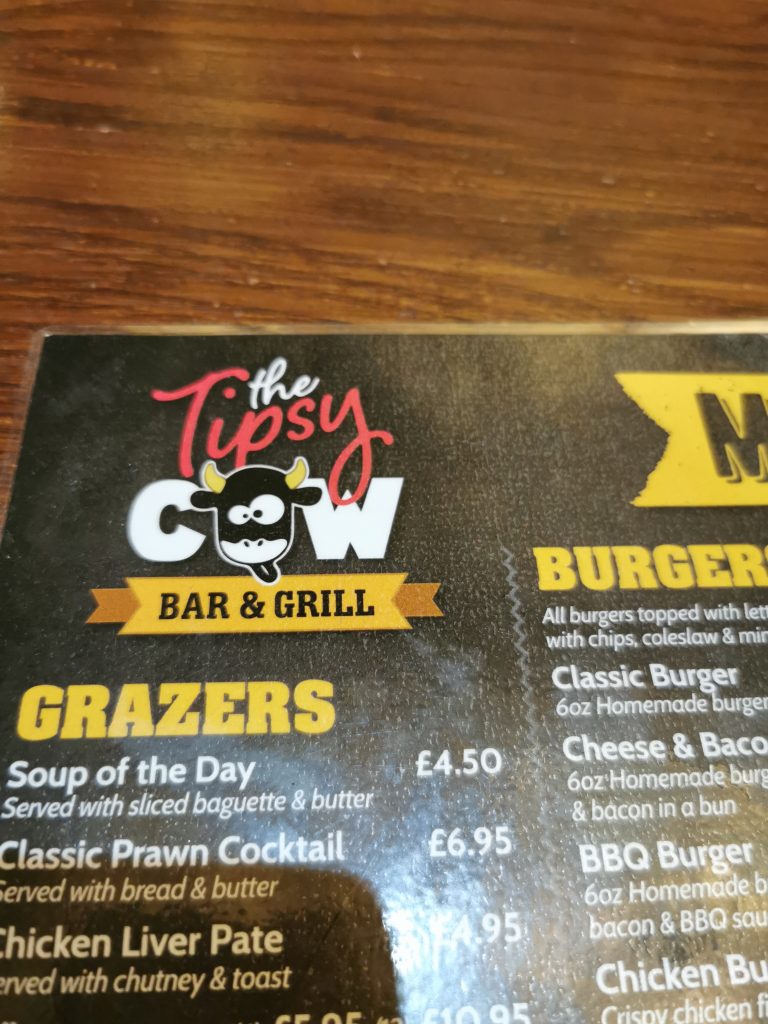 A couple of pints later, we headed out for a walk along the seafront. It was your typical seaside resort, even at 10pm. Loud music, garish lights….

Speaking of lights, I was in streetlight heaven. The majority of the streets were lit by SOX (low pressure sodium) lighting. It must have been decades since I’d witnessed a scene like this, and seeing as this light source has been phased out, it’ll probably be the last time too. 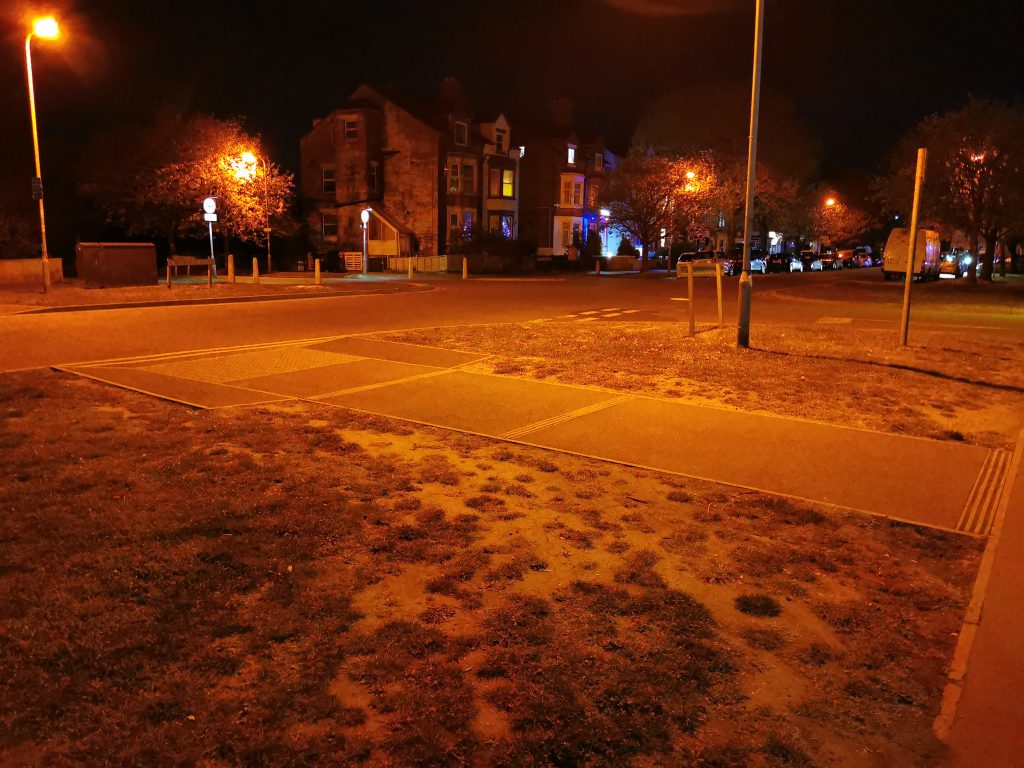 That pretty much concluded Day 1. We spent an hour or two watching Chris Morris clips on YouTube, and then it’ll be Day 2.