hmmm. It’s been a while since I’ve posted an update. I’ve had a bit of writers’ block. Well, I wrote a couple of things, but they just ended in vitriolic rants about certain people. Thankfully, however, last week was a week off work, so I’ve had time to catch up with things that I love. Record collecting, for example.

The last couple of weeks have certainly been part of a record collecting binge. This is the first time since I was a kid that I remember having such a long, hot summer, and since the weathermen have guaranteed long, hot weekends, I’ve been able to arrange trips to car boot sales with Chris. Last week, it was Seaham, and the week before was Sedgefield.

Now, I’m sure I started typing about the Sedgefield one, but I can’t find any trace of it, so I mught have dreamt it, but basically, I bought lots and lots of CDs and records. £2 entry fee, which wasn’t too bad. I just remember knocking out some crap jokes. A guy selling plants, and I said to Chris “they’re mint, them”. Of course, it was an actual mind plant. Shris laughed. the guy behind the stall said he must have been easily amused. I was just happy that someone else heard the joke. On another stall, I commented that one of the CDs he was selling was Absolute Garbage I had to spell it out to the store owner, who seemed to be slightly offended that I happened to be slagging off one of his CDs. No mate, just a crap pun.

It seemed to close early, as most of the people were packing up to go see England play. By the time I’d got home, they’d scored 5 goals. Turned out to be a great day overall.

Another week passed, and it was time flr the first Middlesbrough record fair. This was the first one for two years, and it was nice to have it back! Unfortunately, the day ended in absolute disaster… hanging around for three hours for a lift, only for my lift’s battery to run flat, and having to get the bus home anyway. I was fuming, and my foot went up like a pudding because of it. Great times.

I did bump into Glen – a fellow blogger and ex-work colleague whom I’ve not mentioned on here for what must be a decade, vut we had a bloody good catchup for about an hour. Preally nice to see him again.

Sunday arrived, and another visit to a car boot sale was arranged. Chris wanted some “tat” for “something” – saying what he wanted, and what for might actually spoil a surprise for someone, so I won’t say what. Of course, there’s absolutely no chance that the person involved will ever read this blog, but you never know. Stranger things have happened.

Anyway, we turned up, nice and early at the car boot. Roughly 9AM. There were a queue of cars waiting to get in and set up, but not many buyers. Had we got there too early? Well. Turns out that if you’re a buyer, it costs you £5 to get in before 11:30. the doors then close between 11:30 and 12:30, meaning if you want to get in early, you pay an inflated price. If you want to pay the cheap price, you’ve got to then queue for an hour, and miss out on potential bargains. Crafty.

Seeing as there were very few stalls set up, and it didn’t look that big anyway, myself and Chris went to Sunderland. Honestly, you’ve heard of ghost towns. You’ve never seen a ghost town until you’ve walked around Sunderland city centre at 9:30. My word. Even the pigeons were hobbling about, looking like they had hangovers.

I couldn’t bear the thought of being in Sunderland for any time longer than I needed to, so I quickly abandoned the idea of hanging around there for two hours, then queuing in the baking sun. Instead, I bit the bullet, paid myself and Chris into the car boot at the inflated price. Damn them. their cunning plan worked. 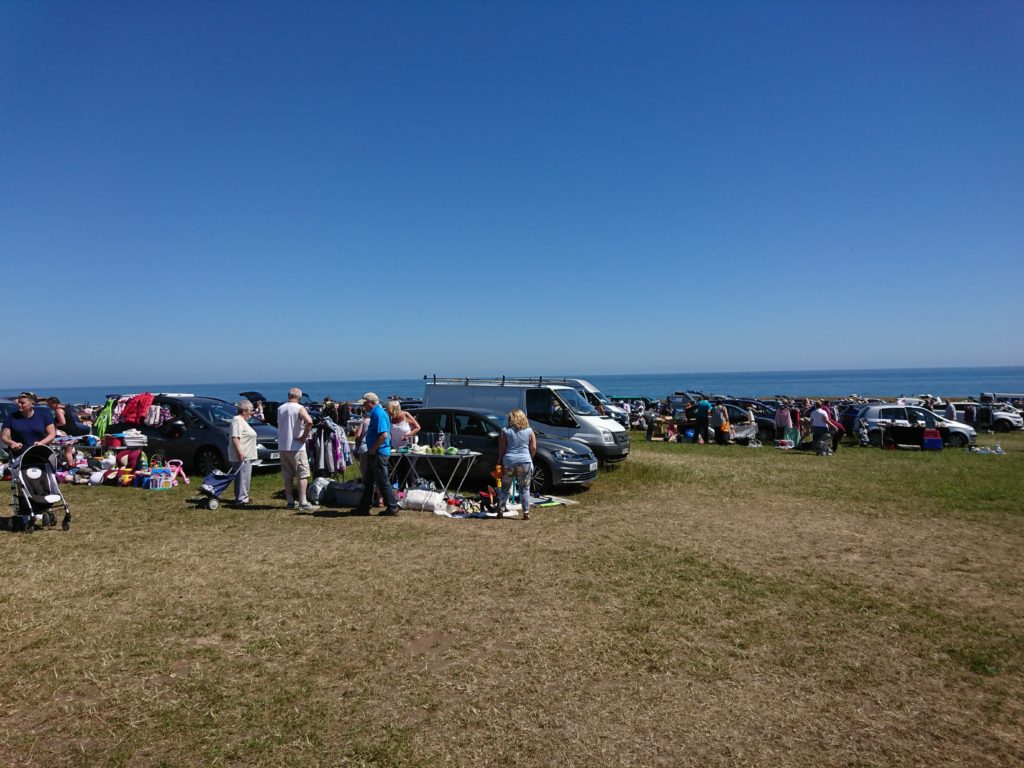 Unfortunately, there seemed to be more stalls selling absolute garbage than music, which, to me was a little saddening, although I did come home with quite a few CDs, a Zodion SS6 photocell for a streetlight, and a cassette tape for a format I don’t actually own… 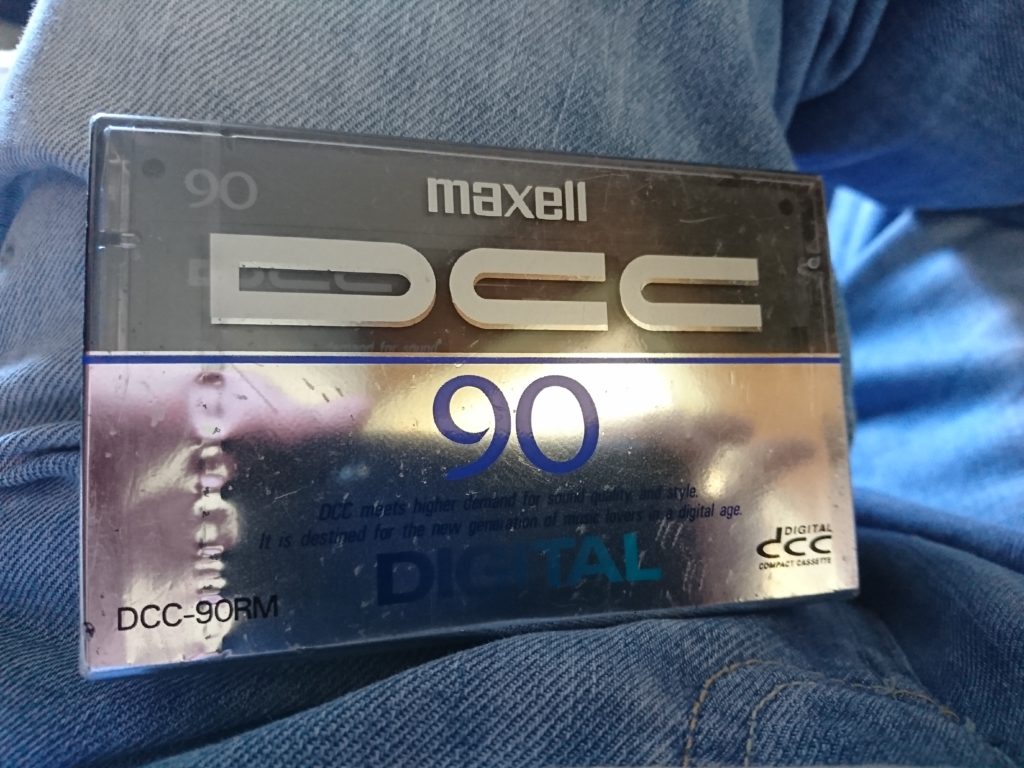 Ah yes, the humble DCC. I remember, as a kid, I picked up a copy of Q magazine from 1993, that had a huge article on DCC. I mainly got it because it had a free CD on the front. As I’d only picked up my first CD player the Christmas before, any type of cheap CD to expand my music library was always welcome. Though, as a snotty teenager, the articles went more in-depth than what I liked. I think I’d only stopped getting comics at that point. Still, I was interested to see if this format ever made it into the wild. It didn’t, DCC sank without a trace (at least in your everyday consumer spectrum anyway) and I never ever saw one for sale.

That is, until I bought the one above. the guy had three for sale, one unwrapped. He’d clearly, at the time, bought these by accident, thinking they were just standard cassette tapes. I like to think he’s been carrying these to boot sales every weekend since the 90s and this is the first time he’s sold one. Probably not though.

Fast forward a week. If I haven’t bored you already, the weekend was quiet. I didn’t actually go anywhere. Mainly because I couldn’t. My guts were in absolute tatters for 4 days. No idea what caused it, It was a slightly toned down version or what happened to me when I was about 17. I’ll not go into it, but trust me, if I needed to go to a fancy dress party, I could have swallowed some gravel and went as a shotgun. Not nice at all.

Tuesday was the day when I finally mustered up the courage to leave the house safe in the knowledge that I wouldn’t be splattering my jeans. I’d made it my resolution to visit every charity shop in Hartlepool. The first stop was The YMCA shop, where I picked up probably my 2nd best purchase of the day… “No Sound Without Silence” by The Script. Not the type of album I’d normally see myself go for, but when I was in Amsterdam a few years ago, it was the only CD that was played on the coach, and I ended up liking it. Not enough to pay any decent money for, but for 50p, I couldn’t go wrong. It also has the theme to “Mrs Brown’s Boys Da Movie” on it… Terible film, great theme. Sorry.

I travelled from one end of the town to the other. While I was waiting for the bus, I heard a young chav lass shout “Fuck off” to her child. The child was below full speaking age, and was happily gibbering away to his mother Her response… “Oh, yeah, yeah. I had one of those, but the wheels fell off”. I had to laugh.

Towards the end of the day, I headed to the town. In one of the charity shops that shall remain nameless. A lad was looking at some CDs, went to the counter with 3 CDs, but the manager saw he was holding 4 just a minute earlier. Unknown to her, he’d put one back, but it was too late. She’d asked to check in the bag he was carrying. Well. You should have heard it. Not from him, but his mother, who was elsewhere in the store.

“Are you the manager? What’s your head office number? I’ll be reporting this! Do you know how much I spend in here? You didn’t apologise for looking in there”

There were so many things wrong with her argument. Now I know a little about customer services, after being in a role like this, but at the end of a telephone.

Point number 1. You can report staff all you want to a head office. If they’re double checking to make sure that stock hasn’t been stolen, then they’re always going to side with the member of staff. That’s your job. Point number 2. Shops are shops. If you’re offended by someone doing their job, then fuck off. Don’t come back. Don’t buy products from them ever again. If you dropped down dead tomorrow, the charity won’t fold. They won’t be looking out for you, as they stand underneath a big “TO LET” sign with a key in the shutters. No, ther people will buy stuff.

I did feel sorry for the manager behind the counter. I just rolled my eyes, as the complaints echoed out of the store and down the street. It’s probably water off a ducks’ back, but still.

Sorry, I went off on more of a ran than I intended there. I just hate rude people. Anyway you’ll notice that the Script CD was only the 2nd best purchase of the day. I’m sure you’re dying to know the best….

A keyboard. Yes, one of those things that you type into. One of the stores had a plethora of keyboards dumped under the CDs. Now, these were dusty old things. It was clear to see that there was a nice Dell keyboard underneath all of the tat. It looked practically brand new, but with the dust, and a very small amount of key wear. 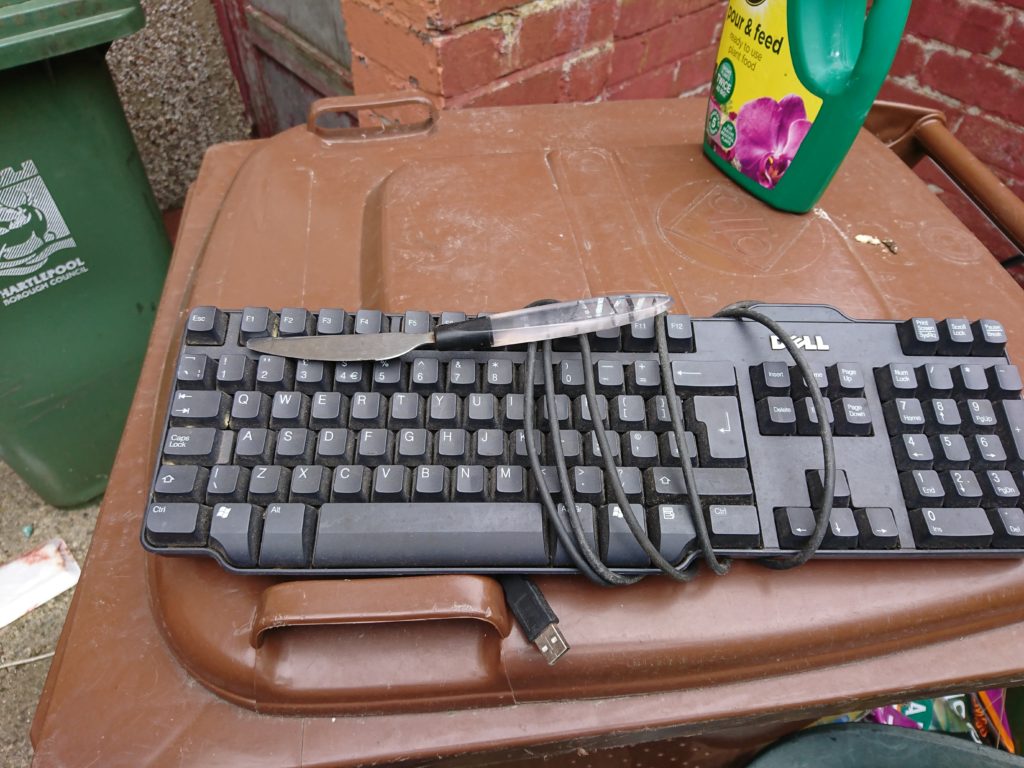 Now, some places state that keyboards have more bacteria on them than toilet seats. I’ve not looked into that statement in any great detail, but it’s always had me a little wary over 2nd hand keyboards, but at £1.75, this was too good to miss. the knife didn’t come with it, by the way, it was just a make-shift key puller.

It had occurred to me, while approacting the wrought iron gates and gravel driveway or Mercuryvapour Towers, that this keyboard was probably hiding something. Why was it practically unused? Off came the keys, aaaaand…. 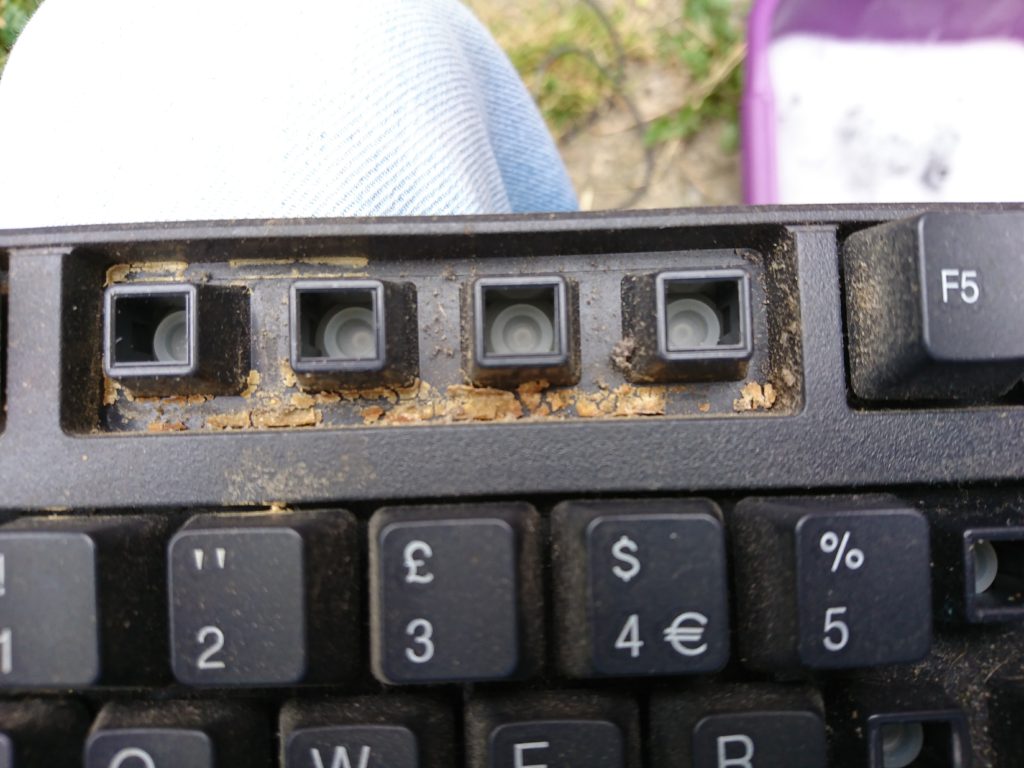 Oh holy Christ! What the fuck is that? My god, I’d just gotten over a stomach infection, it looked very much like I was on course for another one. I have no idea what this stuff was. These Dell keyboards have drain holes, so thankfully, whatever it was only got caught under the F keys. Out came the Cillit Bang. The smell coming from the muck was ungodly. At a guess, from the colour and the smell, I’d have to say it was vomit, but I’ll never know. After an hour of scrubbing / spraying / wiping down with antibacterial stuff., it came up looking absolutely brilliant, and I can confirm that it actually fully works, because I’ve been typing on it for the entirety of this post! 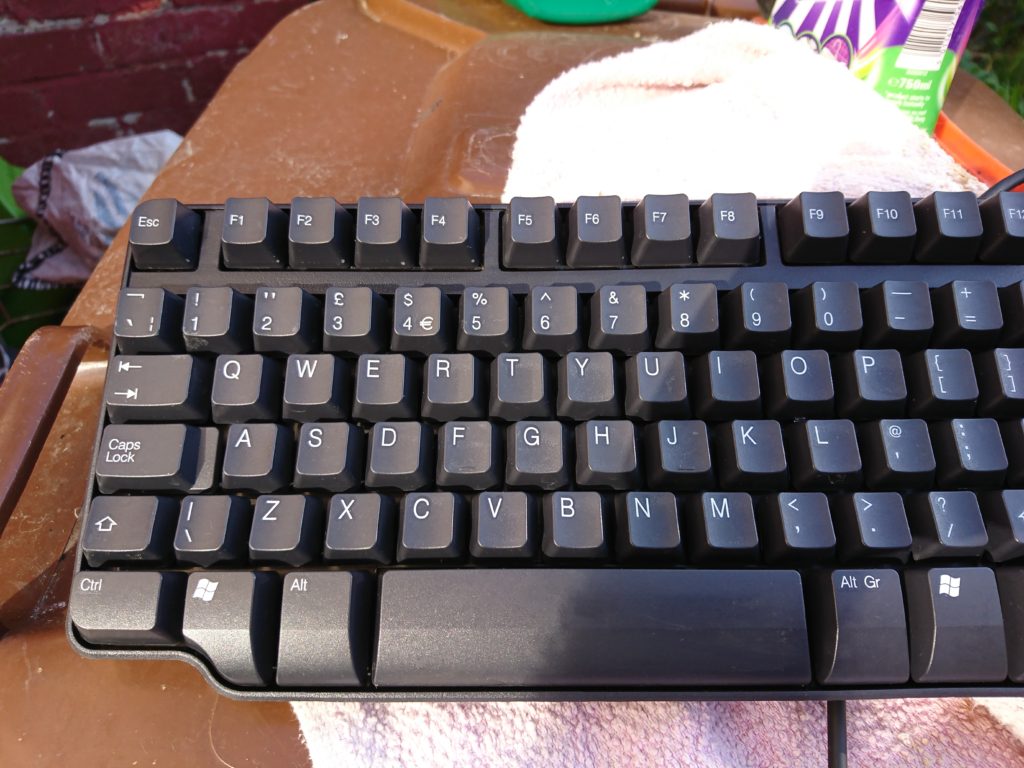