Well, that last post was a slight detour from the current subject matter. It’s been a week since the whole steak incident, so we now return to your scheduled programming – the ongoing saga with my bloody foot! Anyway, I’ll continue where I left off. You’ll have to read below if you want a recap

July 30th came. It was a dreary Tuesday. Once again, the trip was made to North Tees.. The specialist was a jolly man. who spoke with a news-reader type voice. I entered the office, took my shoes and socks off, and he had a play around with my toes. After lots of umming and ahhing, (the type you get when a builder is inspecting your boiler (oo-er), and thinks the job is going to be rather costly), and it was decided that the best decision was to cut part of my toe off.

Well, the beWHAT? THEY’RE GOING TO WHAT? Admittedly, the next few minutes are a blur, as I had to come to terms with actually losing a body part. Thankfully, he dictated what he was going to do, and sent me a letter with it all on. Basically, there were lots of technical terms referring to lobbing off a bit of toe. It did start, however, with him calling me “This chap”. But, in a nutshell, my toes appeared to be “clawing”, as in, they’re permanently clenched in, and the tip of the toe had been rubbing so much that it probably wasn’t going to be able to be saved. There’s probably a technical name in that letter, but I can’t be arsed to look it up.

He also berated my choice of footwear. Apparently, walking boots were crap for this type of foot problem, which was entirely contradictory of what I was told by another foot specialist, who measured me up for my insoles just a few months before. For fuck’s sake.

A lady from orthotics came in and measured my feet, while the specialist went through his extensive checklist of what could happen during the operation. Strangely, a lot of bladder related stuff and not much else. It was arranged for me to have my pre-op assessment now. This was basically because it’s a 30-mile round-trip to get from the leafy grounds of Mercuryvapour Towers, to North Tees hospital.

All this entailed was a lot of box ticking, and a quick examination. “Your blood pressure’s a little high…” said the nurse. I felt like saying “Well, so would yours be if you’ve just been told you’re getting part of your toe cut off…”. A second reading was lower, so it was probably just my white coat syndrome kicking in.

On the way home, I began to concoct some jokes, after all, laughter is the best medicine. This lasted all of about half an hour, before I began to think of someone I know who started off losing a toe, then all of his toes, then his foot, then his leg below his knee, and eventually died. Sure, he had other health problems, but I began to think “Is this how it starts…” Depression certainly kicked in for a few days I certainly wasn’t in a good place for this time. It was a case of waiting for the letter to plop through the door with the date of when I was getting the chop.

The date of my operation came through, and it was exactly a week from when the letter was dated. I genuinely can’t work out if this made me feel better or worse. I had the date. It could all be over, or it could just be the beginning.

I filled the time with a few trips out. The Sunday consisted of a rather disappointing Redcar car boot sale. I’m guessing this may have just been because of the time of year, but thankfully, the walk around Redcar more than made up for it. There was one store called “Goodwins” that had an metric shit-ton of random CDs, listed for a quid. 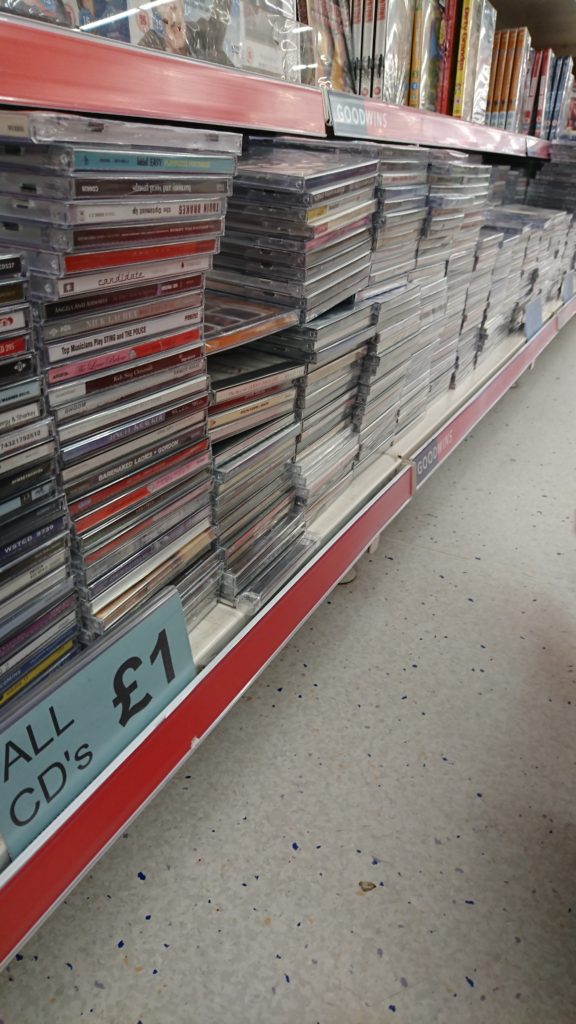 Despite being a quid a pop, I didn’t bother getting any. There were far too many to look through, and there was far too much crap to contend with. “Top Musicians Play Sting And The Police”…. Maybe my heart just wasn’t in it.

I returned from the car boot with literally a handful of CDS and a few records. There just weasn’t very much at all. I needed something to pass the time while I was off, and cataloguing an absolute pile of CDs would have been ideal. Oh well.

This day was the penultimate day before the operation. The next day just involved work, and telling everyone that I’ll “see them when I see them”. The rest of that day was then spent going around the town, grabbing the finer essentials, namely a pair of slippers and a dressing gown for the hospital. This was also the day that I received some devastating news about the death of Rab, an old work colleague. This put things into perspective a bit. I was losing a bit of a toe. Some people have much worse problems.

All there was left to do now was to attempt to get some sleep and hope that tomorrow, and the stay in hospital would come and go quickly….And so will part 4!