A quick round-up for those who missed part 1. Back in 2016, I went walking, got an ulcer in my foot, which didn’t get seen to until 2017 Fast forward two years later, I no longer have a hole in my foot. That’s all sorted. Hurrah, huzzah, and other noises in the similar vein. That was no longer a concern. What WAS a concern however, were my toes. I can’t remember how far through the blog I got, but about 6 months after getting the problem with the base of my foot, I also started getting problems with the toes. I remember it starting with an absolutely massive blister under the nail of my 2nd to biggest toe. This came as a shock to me, as I didn’t even know if was there, thanks to the lack of feeling in my toes. It’s somewthing that has a name, but I don’;t have the “documentation” to hand.

At some point during the summer, it flared up again. It went all red and puffy, so just on the safe side, the lady took a swab, and it did indeed come back with some type of infection. I remember clearly that the tablets started with M, and I was to receive a call from my doctor when they were ready to pick up. Nothing. No phone call. Had she changed her mind? Had she forgotten? Now, I probably should have checked myself but I didn’t. I waited until the next week, and confirmed there should have been some tablets. Alrighty then. Off to the chemists, aaaand… 4 boxes of Flucloxicillin. Waaaait, that doesn’t begin with M.

I went back to the one-life to see what I should have been prescribed, but nobody could tell me what. I asked the lovely receptionist, though as I suspected, she couldn’t see. I went into the clinic the weekd after, explained the predicament (I hadn’t taken the tablets, by the way, as in my mind, they were the wrong ones, and there’s been a history of me being prescribed the wrong tablets for other things, and the wrong antibiotics can do more harm than good.) She got the manager to check, with it was all academic, as by the time of my next foot check, the redness had gone away, and everything appeared to be back to “normal”.

Fast forward to June 21st. I’d noticed that, once again, there was some discharge coming from the toe, and possibly the base. The lady checking my foot thought that it might have been “tracking”. This was not good. This basically means that the infection is going up into my foot veins, and into my bloodstream. The word “Sepsis” was banded about, and after three people came in to check my foot, I was advised to get myself down to A+E now, for a course of IV antibiotics. I’ll probably need to be kept in. That’s cute. There’s not one of those in Hartlepool, so I had to make my way to North Tees. Daddykins already had plans which he had to bail out of. Pretty important plans, and I felt awful for making him cancel those. It’ll be one of those things that will gnaw at the back of my brain, and will every so often get an awful wave of guilt over. The person concerned will never read this, but still.

Moving swiftly on, I arrive at the A+E. Awful, awful place. There was an obviously drugged-up person in a hospital-provided wheelchair, sat in a dressing gown, screaming down their phone, crying their eyes out at the person at the other end, to come and get them, and that they were not staying in, that they were going to book a taxi, etc, etc. This person went in before me, and muffled cries could be heard from the assessment wing. You get a new found appreciation for the people at the front-line on the NHS, having to put up with scum like that. Anyway, this person continued the conversation they came back… “They said I was being abusive”. Yeah, I bet you were.

I was next. I bet I was like a coffee break compared to the last person. I’m needle-o-phobic, so I look away as they insert what I thought was a needle to draw blood. It’s a standard procedure, and although it’s not one that I’m a fan of, it’s one I understand is necessary. I look down. 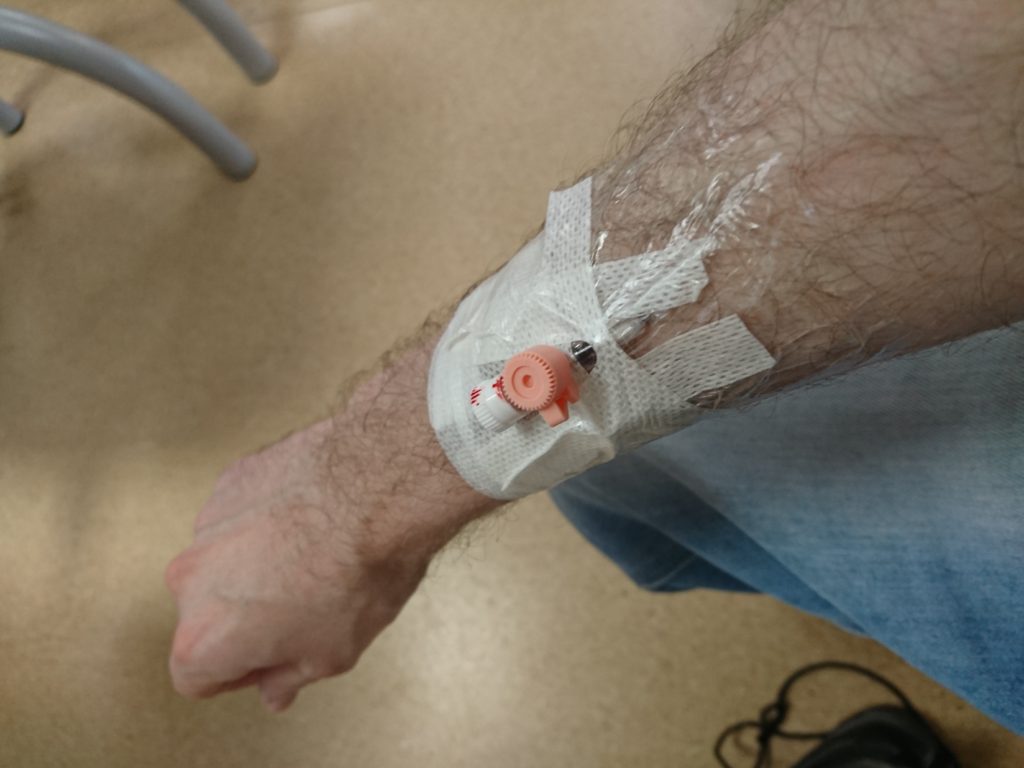 Nope, they weren’t drawing blood, they were fitting a fucking cannula. Now, at this point, I’ve never stayed in hospital. Theis pretty much guarantees I was about to break that duck. I’m not sure if they checked my blood pressure before or after they inserted that bloody thing (no pun intended) in my hand, but I’m pretty sure it would have doubled. Somewhere down the line, I explained that I really didn’t want to stay in hospital. I’d came straight from work, I only had the clothes I was stood up in, no other medication, I don’t even think I had money in my wallet. A compromise was to be made.

It was clear that I needed IV antibiotics, at least to start me off. That means I’d be connected to a drip, so I was led to a room. The connection was made, and a line was drawn on my foot to mark out if it was being efrective, and I sat there. I took a photo of the view so I’d remember it for the rest of my life. 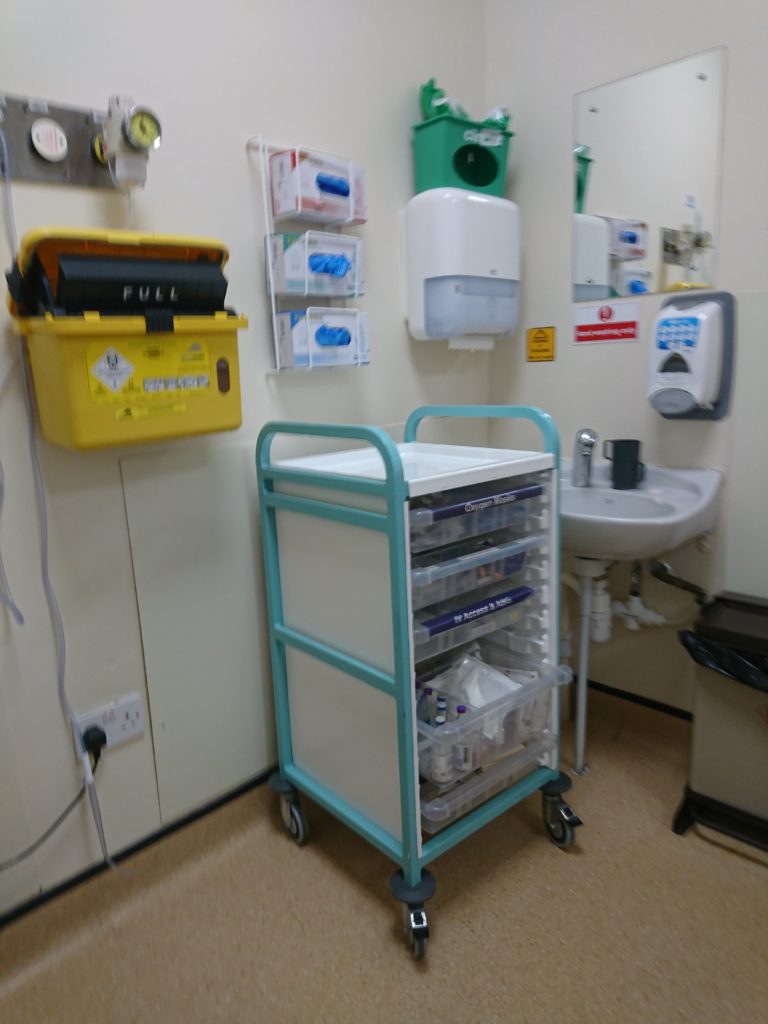 OK, so one course of IV done, but still there were more. It was agreed for me to return back to North Tees at 9:30am the next morning for the next course of IV. In the meantime, the extremely uncomfortable cannula would be wrapped up and kept in there. Lovely.

Well, what a shit night’s sleep that was. As the photo shows (if I decided to include it), the cannula was in my right hand, meaning sleeping in my bed was impossible. This meant I crashed on the couch.

Both myself and Daddykins were up for part 2 of this journey. Again, the same streets, the same roadworks, the same entry, the same corridors…. Oh, wait no. This time, I was told to go to the “Ambulatory Outpatients Diary Room” I have no idea what that means, and I had even less of an idea how to get there. I have one rule when it comes to hospitals… If I’m not sure where I’m going, ask someone clutching a clipboard and/or stethoscope. At the time of typing, this has been effective approximately 20% of the time,, and if I’d followed the sihns, I’d have been there. But then again, this is Percy-logic, and I get to speak to nice poeople, so what the hey.

I arrive at the “Ambulatory Outpatients”. Nobosdy there. I examine the desks for sign of life. There’s a half drank bottle of diet coke, and the remanant of a tuna sandwich that had started to curl up at the ends. Nobody there at all. I think I was stood there about 20 minutes before someone came to see me. They must have noticed me eyeing up the rather nice selection of well-worn biros behind the desk.

Eventually, someone comes to see me, and we discuss the next course of action. Another dose of IV today, and a nurse would come out to see me for the next two doses, and the final one will be given the following morning back at the hospital. Phew, at least I didn’t have to stay in.

10 minutes later, I was free to go. I just had to wait for the nurses to come. Indeed they did. Nothing worse than sitting, watching the cricket, while two burly nurses pour drugs through a little hole in your arm. Twice.

Sunday comes, and off we jolly well pop back to the hospital. It was noted that the nedness had already began to go down, so the antibiotics were clearly working. It was agreed that I’d finish the antibiotics in tablet form, and I was fee to go. 80 flucoxicillin tablets over the course of 10 days (and two weeks on the sick) and I was right as rain. They took yet more blood, and while they awaited the test results, I had to sit around in the canteen for about an hour. They gave me a voucher for a free cup of tea, however, so it wasn’t all bad. 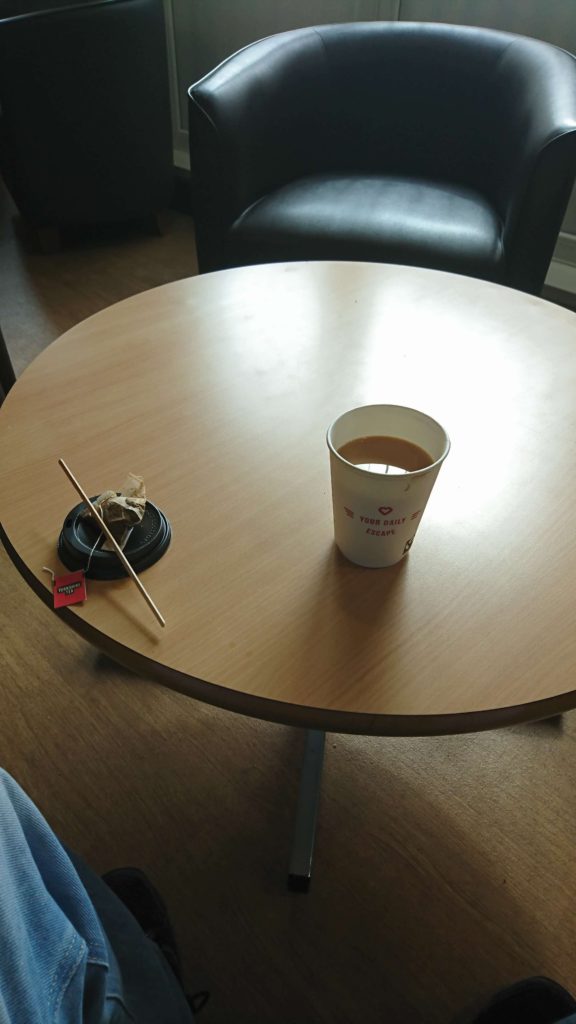 The IV dose was completed and finally, the cannula was removed. I was then assigned back to the high risk podiatry again for an appointment during the week to get my proper dressings put back on. This was a blessing, as within 30 seconds of me being in the chair, it was duly noted what was wrong with my foot. It looked like my toes were slightly crooked, meaning that none of the weight was getting put onto my big toe like it’s supposed to, and the little fatty bad that’s on the sole of my foot had either shifted or worn away. I was referred to a specialist for an appointment at the end of the month. And what did he say? Well, you’ll have to wait for the next part to find out!