For the long-time followers, you may remember that I used to enjoy my regular Wednesday trips to the Hartlepool Flea Market. I’m afraid to say that they will never happen again. 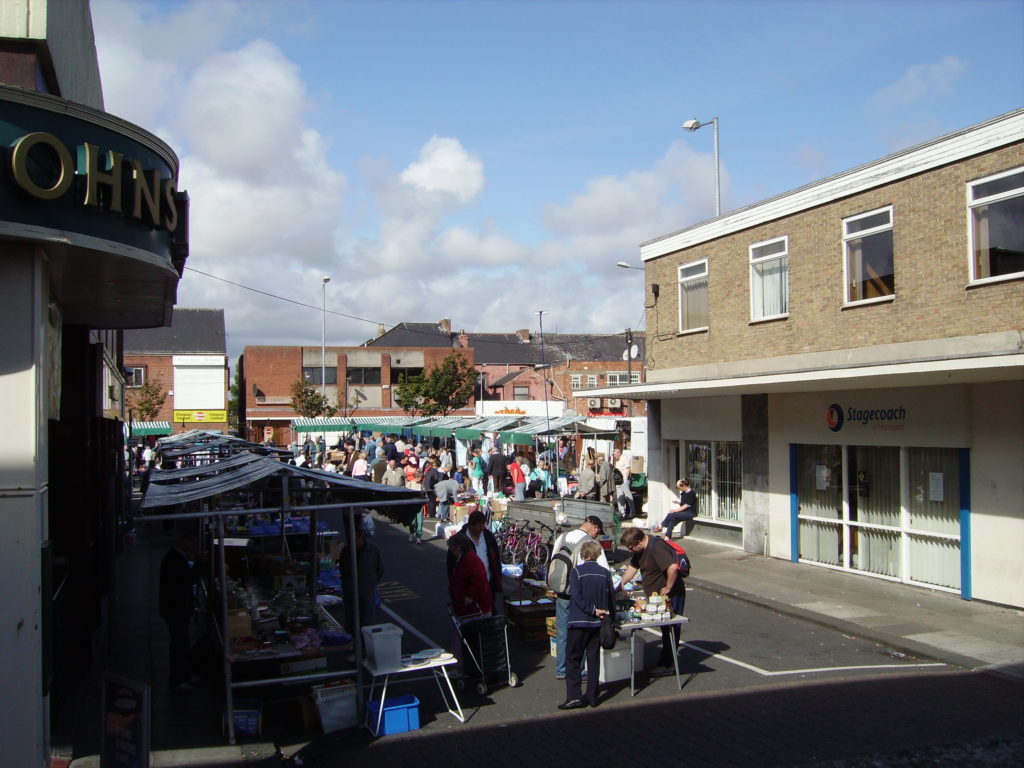 This is now a view that will probably never reoccur, for you see, the flea market and the regular market have been combined to form one large market. A “supermarket”, possibly? Well, with some of the tat on offer, I’ll not use that phrase.

Today was my first visit to the afore-mentioned “merged” market. The whole day started off extremely un-promising. Thursday is our bin day, so imagine my disappointment when I go and collect the bin, only to feel the depressing feel of cold rain on my balding head. It looked that I’d be missing out on another week of erm.. new market activities. Thankfully, the rain disappeared instantly, and after a shit, shave and shower (only one of those is true), I donned my replacement phone headset, and headed off in the general direction of the town. It’s the first time I’d been out early enough on a Thursday morning to see everyone’s bottle/can recycling boxes full. It would appear that quite a lot of people on this estate have a lot of parties or alcohol problems.

By the time I’d reached the town on foot, the sun was beginning to break through. I had the misfortune of watching a seagull devour a pigeon to within an inch of its life, in the middle of one of the busiest roads in the town. This thing was going hell for leather on this poor pigeon. Traffic eventually forced the seagull to fly off, leaving a mangled, barely alive columbiform in the dead centre of the road. It was one of those “Wish I had my camera” moments. I’ve never seen anything like it before, and I’m assuming, neither had that bloody pigeon.

Shaken up by this whole ordeal (not really), I yoinked some money out of the cash point, and headed in the general direction of the market. I wouldn’t say I’m overly impressed with the whole layout. There seems to still be a great divide between the “flea” and “standard” markets, yet the flea market feels horribly crowded. I can’t be the only one who thought this. While I was exploring the new CDs on Erics’s stall, Andy the Iridium Fan (ATIF) stood right alongside me (plus bike), and didn’t even recognise me until I uttered “Not talking to me, then?”. I don’t know whether it’s a good thing or not that I’m not instantly recognisable from a distance…

Anyway. I got some “classics” from Erics stall, including Mike Oldfield’s “Music of The Spheres” for £1. I’ve been after that album for a while ever since I “heard” an “advanced” “copy”. It’s not my favourite of his, but it has its moments. I remember almost paying £14 for it in the now defunct Zavvi store in Middlesbrough, but I thought “I’ll come back later”. I never went back.

In all, I spent £10 on Eric’s stall. I got some absolute garbage which only I remember, such as “Sacred Spirit / Chants and Dances of The Native Americans”. I remember it for its classics such as Ly-o-Lay Ale Loya, and Yeha-Noha. Honestly, I’m not shitting you. I know these tracks. Imagine my shock when ATIF knew them also, as his dad had it on LP. After purchasing the CDs and departing with ATIF, I headed into the town centre. I decided to miss out on my usual pastie, and instead headed to Iceland to see if they had started stocking the “Birds Eye Essentials” chicken curry again. The answer was negative, and left the store empty handed. I turned my attention to Heron, where I picked up 4 raspberry Ribenas for £1, and two Ross chicken curries for £1. The latter curry is, if I’m honest, diabolical. Small, hardly any rice, full of peas, complicated instructions which suggest the use of the “Defrost” section of the microwave, and they almost always come out drier than a nun’s (Don’t go there -Ed). The Ribena, however, was awesome, despite the fact I drank three of them, and then realised I’d hit my recommended sugar level for the day. No, seriously.

A 288Ml serving of Raspberry Ribena contains 30 grams of sugar. A 500ml can of Carling contains 11 grams. You’ll forgive me for sticking with Carling, then.

Home Bargains was my next stop, where I stocked up on Wispa’s, cherry coke and rice. Oh, and hand wash.

I decided that I couldn’t take the town anymore, and grabbed the next bus back to Mercuryvapour Towers. It arrived in only a few minutes. Unfortunatelty, a phone malfunction meant that I couldn’t listen to music on the way home. Instead, I was left listening, and unfortunately, taking in the conversation from the two old biddies in front of he… “Eeeh, well you shouldn’t let her upset you…. that’ll be what she wants…”. I clearly never got the full conversation. I didn’t particularly care. Hopefully, typing it in here will help me forget.

Daddykins was out when I got home. I ate my curries, and spent the rest of the afternoon in a vegetative state. One thing I was looking forward to was Wimbledon. I never thought I’d say that on here, but I was hooked on what was the most historic day of tennis ever.. I was more interested in the fact that the day before, I’d noticed that the scoreboard had crashed at 47-all. It was something that should never have happened. It did. History was made. It was the first time a flip-dot display had made the news since… well, Chad liked my last post, I can’t have that happening twice.

Scoreboard glitches were rectified, and eventually, the match ended with Isner winning. The final score was something stupid.

2 thoughts on “The flea market? On a Thursday?”